Next week, the public will have two opportunities to view the latest draft of the Alamo interpretive plan when it’s presented to the Alamo Citizens Advisory Committee on Monday and Thursday. Unlike a series of meetings held in June, the public will not have a chance to voice opinions.

The 29-member citizens committee will be briefed on the latest draft on Monday, and vote on the plan on Thursday. A vote of approval will send the interpretive plan to the Alamo Executive Committee — a two-member body composed of Mayor Ron Nirenberg and Texas General Land Office Commissioner George P. Bush.

“I can say that the citizens advisory committee is ready, they’re ready to move the plan forward,” District 1 Councilman Roberto Treviño told the Heron Thursday night.

It must also be presented to the Planning Commission and the Historic and Design Review Commission, before ultimately heading to City Council for a vote on Oct. 18, Treviño said. Specifically, the Council will vote on whether to lease city-owned property on the plaza to the state, as well as on the closure of parts of Alamo and Houston streets.

In early June, the citizens committee and the public at large got its first look at the latest version of the plan crafted by Reed Hilderbrand (Cambridge, Mass.), PGAV Destinations (St. Louis) and Cultural Innovations (London). Since then, groups have opposed aspects of the plan. Mainly, the opposition has come from two groups representing the descendants of the Alamo defenders — This is Texas Freedom Force and the Alamo Defenders Descendants Association. But pushback has also come from the San Antonio Conservation Society, the Battle of Flowers Association, and a cadre of local architects and urban planners. Even Nirenberg, in an op-ed published in the San Antonio Express-News, and co-authored with Treviño and County Judge Nelson Wolff, opposed the concept of adding railing to trace the footprint of the 1836 compound. District 6 Councilman Greg Brockhouse countered with his own Express-News opinion piece criticizing Nirenberg and the public process.

But mainly, the narrative so far has been about whether to move the Cenotaph. Under the plan, the monument would move roughly 500 feet south to a place in front of the Menger Hotel. The descendants have likened the notion of moving the Cenotaph to the idea of moving the Tomb of the Unknown Soldier, an unthinkable act, while advocates of the move say it’s necessary to reclaim as much of the 1836 footprint as possible.

If the Council approves the plan in October, work would then begin on various aspects of the plan, which includes converting the series of historic buildings opposite the Long Barrack into a museum. 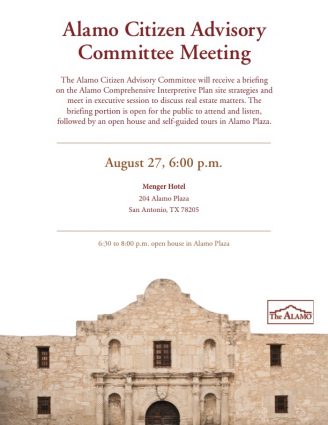 The meeting on Monday is scheduled for 6 p.m. at the Menger Hotel, 204 Alamo Plaza.

For the first 30 minutes, the citizens committee will be briefed on the interpretive plan by PGAV Destinations Vice President John Kasman and Reed Hilderbrand Principal and Partner Eric Kramer. The public can “attend and listen” during the briefing, according to a flyer the Alamo is circulating, but, again, there won’t be an opportunity for public comment.

At 6:30 p.m., the public is invited to attend an open house on the plaza while committee members enter an executive session to discuss “real estate matters related to the proposed site strategies identified in the Comprehensive Interpretive Plan,” according to an agenda posted on the city’s website Thursday night.

The tour will be self-guided, but Alamo staffers will be on hand to assist, said Trish DeBerry, president and CEO of the DeBerry Group, which is handling the interpretive plan’s marketing and public relations.

Visitors will be able to hear the historical stories and see more closely what the space may become and how it might feel.

Then on Thursday, the citizens committee will meet for potentially the last time during this phase of the planning, 6:30-8:30 p.m. Thursday at City Council chambers in the Municipal Plaza building, 105 Main Plaza. It will hear its tri-chairs — Treviño, Lionel Sosa and Sue Ann Pemberton — present committee recommendations followed by discussion. The public is welcome to — again — “attend and listen.”

On Thursday night, Treviño responded to potential criticism that the final meetings of the citizens committee have been rushed, considering the fact that meeting details were not posted to the View the agendas here.city’s agendas page until late Thursday night. Since early June, Treviño and city officials have been hammered by the various groups about the public input process.

“I reject any idea or notion that this hasn’t been talked about enough” Treviño said. “We’ve had hundreds of meetings. My day is filled with Alamo meetings, Alamo meetings.”

He added, “For anybody to say there was no input or no evolution of the plan, they don’t know what’s going on. They weren’t around the last four years.”

A timeline of meetings provided by Treviño’s office shows the public planning began in 2012 with placemaking workshops and stakeholder interviews and meetings. The citizens advisory committee met for the first time in May 2014. This year, for the latest version of the plan, seven meetings have been held in San Antonio. Since the design was unveiled in early June, meetings have been held in Austin, Fort Worth and Sealy.

Previously published
» Explaining the impacts of a two-way Losoya Street
» Treviño: Keeping the Alamo Cenitaph in place is not an option
» Despite Treviño’s firm stance, Cenotaph activists are not done with their fight
» Saturday’s protestors to Alamo planners: Come and take it
» Cenotaph process are most frustrating for those opposed to Alamo plan

Setting It Straight: Due to an editing error, the location for the Aug. 30 meeting was incorrect in the original version of this article.