The 210 Josephine Apartments, a 259-unit apartment building slated to be built near the Pearl, is scheduled to begin construction on July 1, and be completed by May 31, 2023, according to documents filed with the state.

To use popular sports vernacular, 210 Josephine Apartments, a partnership between Lynd Company of San Antonio and the San Antonio Housing Authority (SAHA), may be a unicorn.

Housing advocates would say for all those millions Lynd is saving in property taxes by partnering with SAHA, that there should be far more apartments priced for people making far less than 60% AMI. Proponents of a denser downtown would say the Pearl area needs more 60% and 80% AMI rents—that those price ranges do still serve a need. In response, some opponents might say, maybe, but it’s SAHA, and SAHA is supposed to serve San Antonio’s most vulnerable citizens.

Before he left to lead the Denver Housing Authority, SAHA CEO and President David Nisivoccia orchestrated two deals with Lynd: this one, and Culebra Crossing, which broke ground last summer in the Alamo Ranch area. Now, acting CEO Ed Hinojosa Jr. has inherited the projects.

In January, I asked Hinojosa if SAHA was going to pursue these types PFC deals, where private developers get full property tax exemptions.

“I think what you’ll see is SAHA (pushing) to get more public housing created in any new transactions that we pursue,” Hinojosa said. “Our public housing inventory is about 6,000 units, including Alazan (Courts). We believe there’s a tremendous need in San Antonio.”

When it’s completed, 210 Josephine Apartments will not have public housing baked into its unit mix, but it will accept the Section 8 voucher, SAHA confirmed on Friday. “All SAHA mixed-income developments accept housing assistance vouchers,” the agency said in a statement.

“Those individuals with vouchers can be 30%, 40%, 50% (AMI) income-level individuals. I don’t think (developers) would be opposed to that concept,” Hinojosa said.

Hinojosa’s message of upgrading and expanding San Antonio’s public housing stock is antithetical to Nisivoccia’s strategy, which was to demolish the remaining public housing and replace it with mixed-income communities. Last fall, Nisivoccia told the Heron that 210 Josephine Apartments and Culebra Crossing were conceived from discussions he and A. David Lynd, the company’s president and CEO, had after they served on an Urban Land Institute panel discussion in recent years.

Another project in the works, St. John’s Square near La Villita, was born from a poolside meeting at the Steel House Lofts, where Nisivoccia once lived, between Nisivoccia and Austin developer Dennis McDaniel, who owns the building.

Finally, another aspect that has been unique to this project is Lynd’s strategy to crowdsource the equity required to make the project happen. Rather than go to a single investor or group of 2-3 investors, Lynd recently held a kind of investment pitch, in which the company offered smaller pieces of the ownership pie to hundreds of micro investors. In the online brochure, one of Lynd’s seller points was SAHA’s involvement and the full property tax exemption.

For this project, $13.7 million was raised from roughly 350 investors through the CrowdStreet platform, SAHA confirmed. Lynd contributed another $1.1 million. The rest of the project’s cost, $45.5 million, is coming from a lender.

The Lynd Company is partnering with the San Antonio Housing Authority (SAHA) on a mixed-income 259-apartment development in Tobin Hill near the Pearl. SAHA’s involvement means the partnership, which San Antonio-based Lynd initiated, will receive a full property tax exemption for the duration of the 75-year lease.

It’s unclear how exactly the partnership formed, other than that Lynd approached SAHA, which was mentioned in a recent SAHA board meeting agenda. Last week, the SAHA board of commissioners discussed the West Josephine deal, but did so in closed session.

Across San Antonio, more and more developers are partnering with public facility corporations, or PFCs, which are publicly-owned nonprofits that grant property tax exemptions in development deals under state law. In exchange for the incentive, half the units must be priced at 80% AMI or lower, which in San Antonio is $46,100 for a couple, for example.

From SAHA’s end, we recently wrote about a development on the West Side on Tampico Street, in which SAHA is partnering with locally-based developer Mission DG. SAHA has also partnered with Austin developer Dennis McDaniel on St. John’s Square near La Villita.

SAHA is starting to hear more criticism from housing observers about its role in partnering with for-profit developers who are providing predominately market-rate and 80% AMI housing, which many experts, including a few local developers such as Victor Miramontes of Mission DG and Mitch McManus, have said aren’t really affordable in the context of San Antonio’s true median income. Critics say the strategy moves the agency further away from its mission of providing housing to San Antonio’s most vulnerable families.

For its part, SAHA has defended its recent development partnerships. During a Housing Commission meeting last month, SAHA CEO David Nisivoccia said the agency’s strategy is to boost its reserves as partners in these higher-rent type developments so it can apply the profits toward building more deeply-affordable housing in the future. Normally, additional funding, or subsidies, are inserted into the cost of a development to lower prices below market-rate and into more affordable price ranges.

“If SAHA was dependent upon its (current) reserves only to underwrite these deals with deep subsidy dives, I’d do one project a year,” Nisivoccia said. “What we are doing now, I can do much more deals and provide much more money and provide much more needed affordable housing at the lower end of the spectrum.”

At the West Josephine development, rents for the “affordable” units, or those under market-rate, will be priced in accordance with federal guidelines adopted by the state. Under the 2020 guidelines, developers can charge a tenant making 80% AMI or less up to $1,080 for a one-bedroom apartment, for example. For someone making 60% AMI or less, they can charge up to $810 for a one-bedroom. For a breakdown of the 2020 rent limits, scroll to the bottom of this article.

It’s unclear if there’s a third partner in the partnership involving SAHA and Lynd, a national developer based in San Antonio, or how the ownership stake is being divided up percentage-wise. In an article in March, the San Antonio Express-News reported Fulcrum Development, also based locally, was a partner. At the time, there was no mention of SAHA’s involvement. Fulcrum didn’t respond to a request for comment.

Lorraine Robles, SAHA’s director of development services and neighborhood revitalization, told the Heron she was unavailable for an interview Thursday afternoon. Jarrad Thierath, Lynd’s vice president of Development, did not immediately respond to an interview request Thursday.

According to the agenda item for SAHA’s meeting, Lynd will build the mixed-use building, and will also market, lease and manage the apartments. SAHA’s is only role is to contribute the property tax exemption.

Ultimately, SAHA’s PFC—known as the San Antonio Housing Facility Corporation—will purchase the property, currently occupied by Materials Marketing, a stone and tile company, and lease it back to the partnership, according to the agenda item.

According to the agenda, Lynd will sell its ownership share five years after the building opens, in which case the partnership will receive 25% net profit from the sale.

SAHA will receive either 25% of cash flow after debt is paid or 25% of the tax savings from the exemption—which ever is greater. The partnership is estimated to collect $7.7 million during the first five years the building is completed. 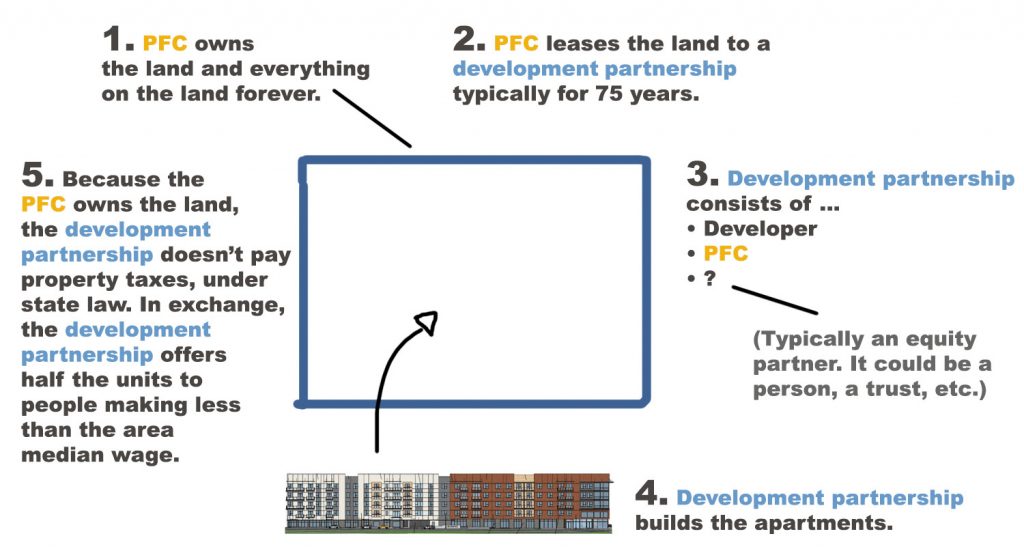 Below are rent limits for affordable apartments in housing properties in the San Antonio-New Braunfels region that received financing or subsidies from the U.S. Department of Housing and Urban Development.
[table id=15 /]