A University of Texas at San Antonio downtown campus with more buildings, taller buildings, all clustered together. Not just on the main square-shaped campus that’s flanked by I-35/I-10 and South Frio Street, Buena Vista Street and César E. Chávez Boulevard, but on the Cattleman’s Square lot to the north and the College of Architecture property to the west.

Or, a UTSA downtown campus that’s spread out — one whose buildings line Frio Street. Or perhaps they are interspersed with the buildings on the other side of the highway, in the downtown core, and connect with the emerging tech corridor on Houston Street.

These are two visions for UTSA’s downtown campus that President Taylor Eighmy shared on Wednesday with members of Centro San Antonio, the nonprofit whose mission is to promote and improve the center city.

For now, these are ideas, part of an ongoing master planning process that will be completed around July next year. The process, which the university undergoes every five years, includes the main campus, downtown campus and Park West Athletics Complex, but not the Institute of Texan Cultures (ITC).

In the fall, the university will request funding from the state, but Eighmy did not provide any more details.

“We are working on plans for support,” said Eighmy, who has been president for nearly a year. “Once they are formally finalized in September, they will be shared more broadly.”

In the fall, UTSA, which is seeking to become a national research university designated by the state, also will issue a request for proposals for the Cattleman’s Square property.

In the next couple of weeks, UTSA will announce a philanthropic gift in support of a new school, an Urban Education Institute, Eighmy said. The school is envisaged as partnering with K-12 schools and community organizations, while also housing a high school that would operate as a kind of living laboratory slash campus.

“We’re going to be thinking about creating or moving colleges downtown,” Eighmy said after the presentation.

Other potential schools include:

» School of Data Science, serving as the foundation for the cybersecurity programs.

» Urban Science Institute, which would tackle San Antonio’s growth challenges, such as gentrification or transportation, and drive public policy.

» School of Entrepreneurship & Technovation, which would translate UTSA’s research into economic development.

Eighmy did not offer a cost for all of the development, but said there are many ways to fund such growth.

“Enrollment growth is one way to pay for development of colleges and academic programs,” he said. Federal dollars for research projects, philanthropic donors, capital projects built through the UT system and state funding, and public-private partnerships are all funding options, he said.

As for the ITC, Eighmy said, “We don’t know what that’s going to look like. It’s a completely separate process.”

The university will take the next six months to bring in museum consultants which will advise UTSA on what to do with the 14-acre property.

“We need to think very carefully on how we best optimize the intent of that institute, and the impact that it has,” he said. “I really want to bring it back to: How do we tie it into our academic enterprise.” 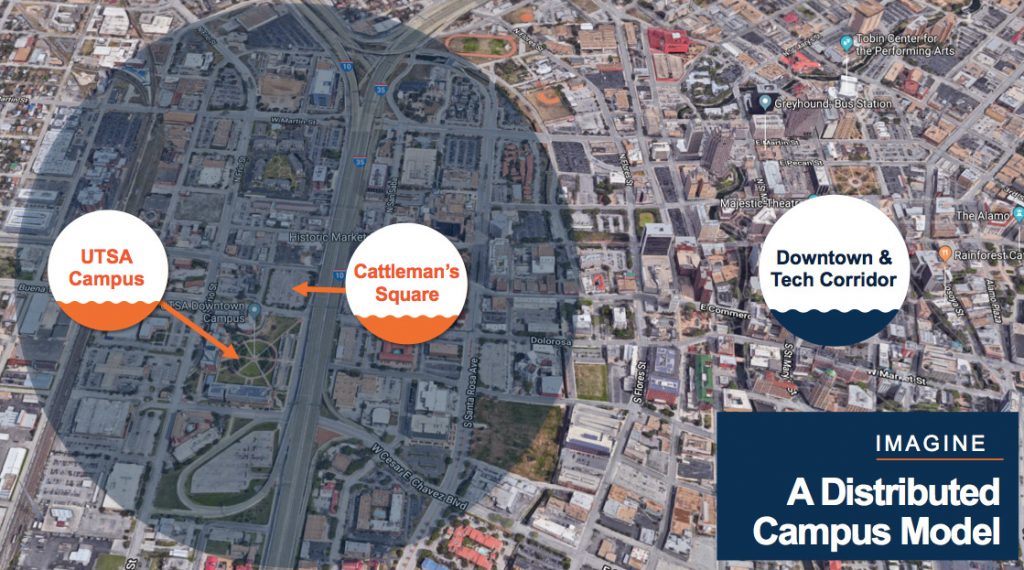