Several times this year we’ve requested an interview with UTSA President Taylor Eighmy about the university’s downtown expansion strategy, but, so far, none has been granted.

We didn’t want that to stop us from sharing the latest draft of the plan, which was recently posted on UTSA’s website.

This version of the plan was presented at a West Side public meeting on May 6.

The plan would quadruple the size of the current campus in 10 years, and eventually serve 10,000 students. It would unfold in two phases—the first phase, which is projected to cost north of $300 million, would include the construction of new schools on Dolorosa Street just south of City Hall.

The expansion is being funded by a combination of public money available to UTSA, including from the UT System Board of Regent’s Permanent University Fund, and some philanthropic help, such as $15 million from philanthropist and developer Graham Weston.

We knew this when UTSA first made the expansion announcement last fall.

What’s new in this latest version of the plan is how the second phase—on property west of the existing university campus footprint currently owned by the city—connects to the near West Side via Buena Vista and West Commerce streets. Buena Vista, in particular, would have a pedestrian bridge that runs level with the vehicular bridge that connects downtown with the West Side.

There also looks to be an elevated park that hangs over a street-level promenade, and basketball courts outside a recreation and wellness center that presumably would be available to West Side residents.

The plan references the High Line in New York and Austin’s Pfluger Pedestrian and Bicycle Bridge as sources of inspiration.

Under the bridge, the plan calls for aesthetic upgrades to provide a more pedestrian friendly connection in the underpass a la Boston’s Underground at Ink Block and Toronto’s Underpass Park.

The map below shows how the campus would connect to the rest of the West Side, as well as downtown. 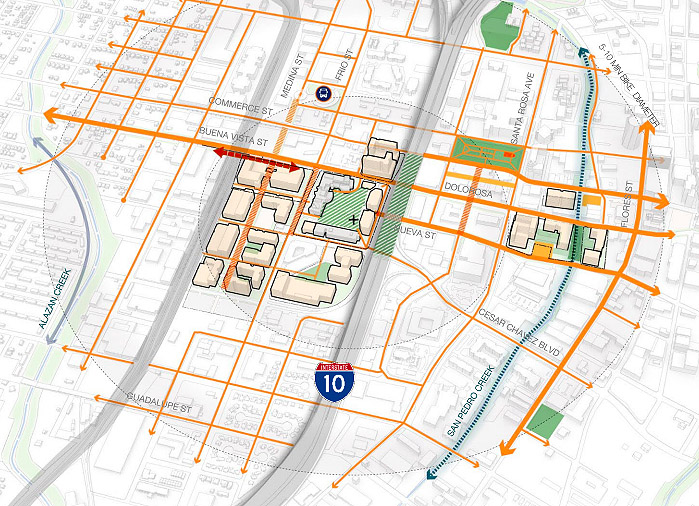 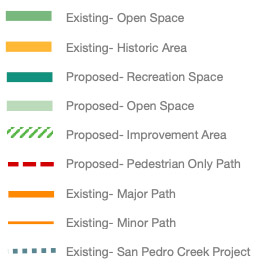 Here’s how the downtown campus would function in terms of building use.

This diagram below shows the additions around the current downtown campus at Frio and Buena Vista streets, a student housing development north of the campus, and a potential wellness and recreation center.

West of the current campus, on properties currently owned by the city of San Antonio, there would be academic and student housing buildings.

It’s worth noting the aforementioned plans are preliminary, and would happen as the second half of UTSA’s 10-year plan. The city-owned properties are not guaranteed to be owned by UTSA. The transfer of the properties is contingent upon UTSA completing an economic impact study and displacement plan, which the university has tapped The National Association for Latino Community Asset Builders to complete, Assistant City Manager Lori Houston said. The city would also have to find homes for the facilities currently on those properties—mainly the Frank D. Wing Municipal Court Building, the San Antonio Fleet Operations and Maintenance building, and a police substation.

East of Interstate 35, in downtown proper, it’s a different story. The expansion’s first phase is expected to unfold the next few years. It shows the new School of Data Science and National Security Collaboration Center, and the College of Business, relocated from the main campus. The latest draft also shows housing on Santa Rosa Avenue between Dolorosa and Nueva streets. And the former Continental Hotel property on West Commerce Street north of the building cluster is slated to become housing for university faculty and staff.

» UTSA has more up its sleeve for downtown campus

» Anticipating UTSA’s impact on the historic West Side