Updated: Click here for the presentation that was shown to the public Monday night.

The current, and perhaps final, version of the Alamo interpretive plan — made available to the media on Monday, but not the general public — shows very little was changed from the version that was first made public in early June. Several controversial aspects remain, including enclosing the Alamo grounds during museum hours, rerouting the Battle of Flowers Parade, and relocating the Cenotaph memorial.

In a public briefing Monday night at the Menger Hotel, District 1 Councilman Robert Treviño and members of the design team gave a 30-minute presentation before going into executive session (behind closed doors) with the Alamo Citizens Advisory Committee to deliberate on five key points of the plan. This confounded some among the roughly 60 attendees who were expecting a meatier presentation, and who were not allowed to comment.

“When you talk about the interpretation of the Battle of the Alamo, that’s one of the five core concepts they are supposed to address,” said Fernando Centeno, a critic of the plan who penned an op-ed in the Express-News a few weeks ago. “As far as I’m concerned, they failed. And then on top of it, they didn’t allow for public commentary. It’s just a real bummer.”

Kathy Acock, a third generation CEO of a family-owned commercial construction company from Houston, took a self-guided tour of the plaza grounds that was offered to meeting attendees.

“I don’t care where they move this monument (Cenotaph) or that tree,” Acock said. “Make it tell the story in all of its magnitude and magnificence.”

Earlier in the day, Treviño and the two other tri-chairs of the Citizens Advisory Committee — Sue Ann Pemberton and Lionel Sosa — and city and Alamo officials, shared specifics on five key recommendations with the media.

» The Alamo’s 1836 footprint would be defined using a “combination of architectural elements,” Treviño said. “Is it all going to be railing? Highly doubtful.”

During museum hours, people would enter the open-air museum through the Crockett building, directly across from the church, which would serve as the formal entrance. The single entrance would orient visitors as they prepare to enter the museum grounds “to provide that experience they’re not getting today,” he said. When the visitor count is high, two auxiliary access points — by the Menger and Emily Morgan hotels — could be opened.

During non-museum hours, the public could enter the grounds through six access points.

After the Heron’s briefing, Sosa, who had to leave the interview shortly after it started, called the Heron to describe a slightly different experience. He said the Crockett building entrance and the two auxiliary entrances would remain open pretty much all the time.

“If someone wants to come in and doesn’t want the museum experience, they can come in through the north or south entrances,” Sosa said. 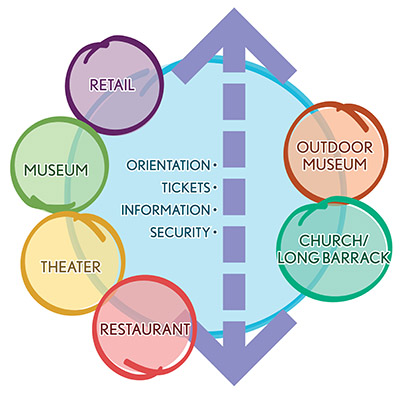 During the Monday night meeting, when asked about whether Sosa’s description of three consistent access points was accurate, Treviño said, “No, that’s not right.

“We know that having three access points open at all times could be costly, so they would do it as needed. If there’s a need to open up those points, we will. They wouldn’t be open for the sake of being open. We want people to take the formal entrance.”

Walling off the Alamo grounds was a concern raised in a July 21 Express-News op-ed authored by Mayor Ron Nirenberg, Judge Nelson Wolff — and Treviño.

“The still-evolving Alamo plan must preserve public access to this community space,” the triumvirate wrote. “We oppose any type of barrier that that would limit access to Plaza at any time, other than for special events.”

When asked whether his support for the walled off version of the plan contradicted the opinion piece he helped co-author, he said “What we wrote was that the site needed to be maintained as a civic space aside from special or schedule events. And so that, I think, is addressed by what we’re telling you: The museum hours are special scheduled and special events. Non-museum hours, it’s open.”

The SA Heron contacted Nirenberg’s office to ask about the enclosed-grounds version of the plan moving forward. Bruce Davidson, communications director, returned our call and said, “The mayor has no comment until after it goes through a few more stages.”

The idea of using physical barriers to define the 1836 footprint has irked a cadre of local architects and urban planners.

“This plaza was given by the Catholic Church to city of San Antonio. It is free and open public space,” Lake|Flato partner and co-founder David Lake said. “As long as anyone tries to circumvent moving in front of the Alamo, and free will, I am totally opposed, as are all the developers downtown and all the architects.” 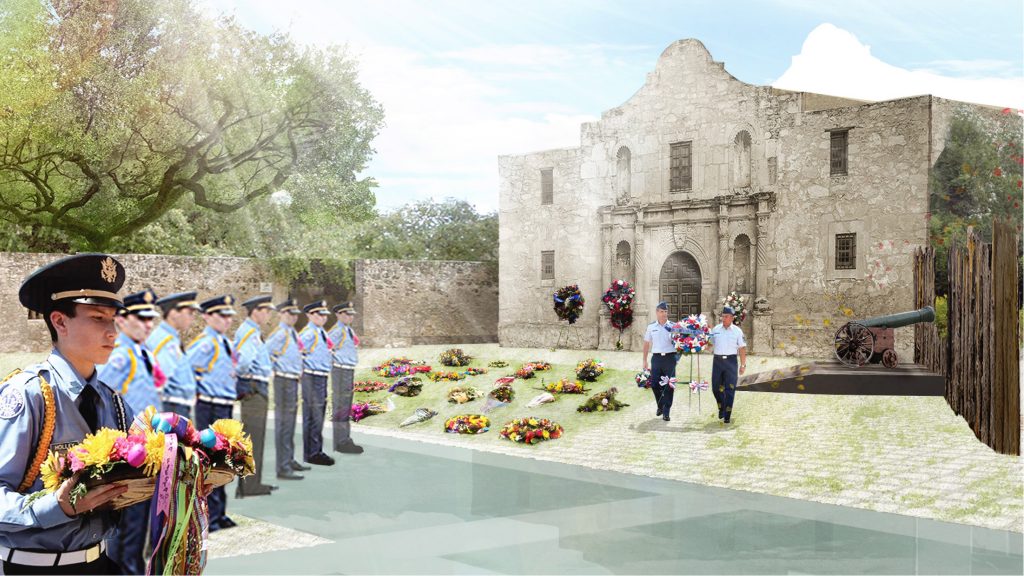 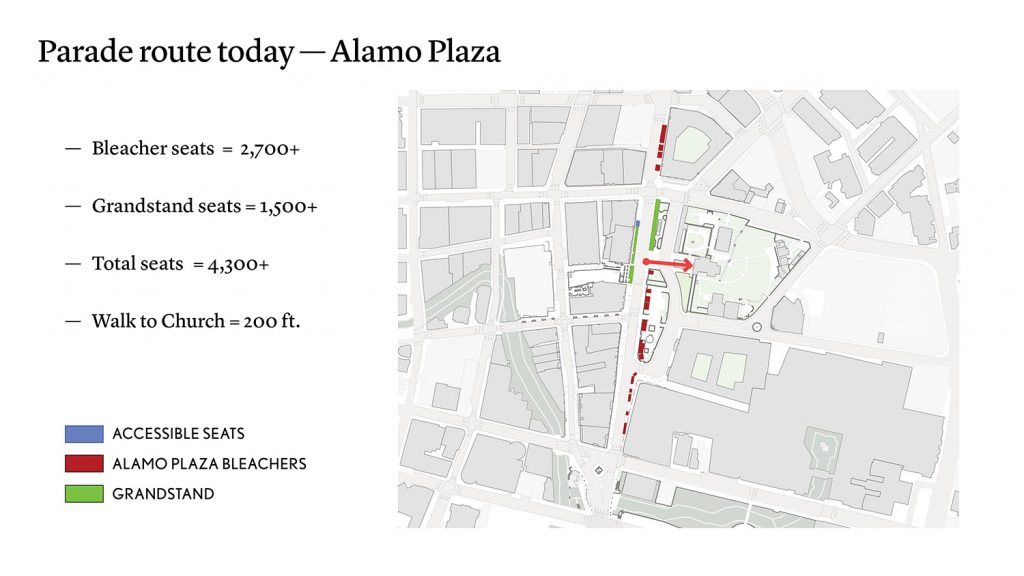 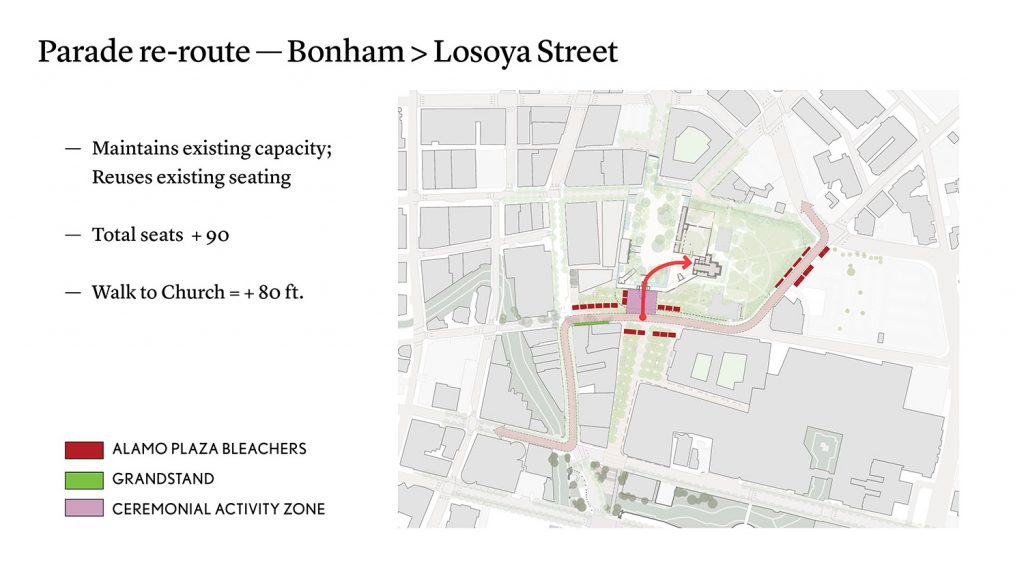 » The Battle of Flowers Parade route would change (as shown in the featured image). There is more than one route recommended. In one version, highlighted by Treviño, the parade would travel behind the church and approach a palisade on the south end. There, the parade’s tradition of cadets taking a bouquet of flowers from parade entrants and walking them to the greensward in front of the church would be held. Currently, the route stops in front of the church on Alamo Street, where cadets perform the ceremony.

At the meeting Monday night, Anna-Laura Block, president of the Battle of Flowers Parade Association, said the group doesn’t oppose the overall plan. “Our parade executives will need time to digest the options for the parade ceremonies to continue,” she said. In a meeting June 21, Block and other members of the association railed against the notion of rerouting the parade, at one point chanting, “We want the route!”

The Battle of Flowers Association is having none of the proposal to move the parade route. #alamo2018 pic.twitter.com/XOqBi1yurd 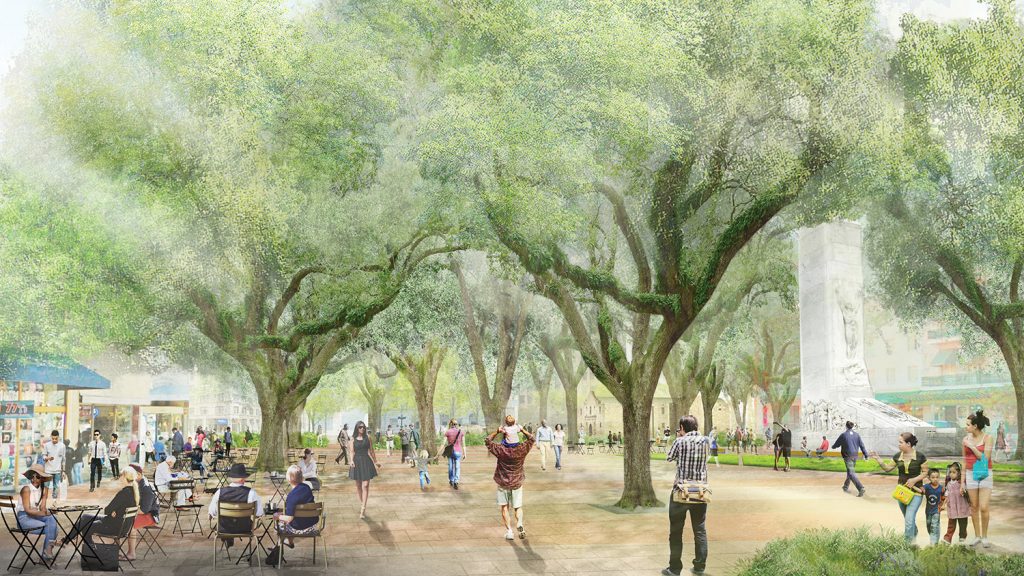 » The recommendation to move the Cenotaph roughly 500 feet south to a location in front of the Menger Hotel is unchanged. This has been the most contentious of all of the recommendations, drawing at least a dozen opponents — mainly, members of This is Texas Freedom Force and the Alamo Defenders Descendants Association — to each of the nine meetings held in San Antonio since June 7.

“I’m a patriotic American,” she said. “It’s a centennial memorial. It’s a slap in the face of anyone who serves our country today to move a monument.”

About 15 attendees displayed her signs, or others. Some interjected their commentary during a presentation by John Kasman of PGAV Destinations, Eric Kramer of Reed Hilderbrand Landscape Architects and representatives from other companies. Audience intrusions came frequently during the Cenotaph portion of the meeting with exclamations of “Leave it alone!”

» The plan indicates the Crockett, Palace and Woolworth buildings remain important, but also require a significant museum. On Friday, the Alamo issued a request for qualifications seeking an architectural historian to “assess and report on the significance” (or otherwise) of the three historic buildings. The plan includes the possibility of demolishing portions of the three historic buildings, a notion that has been vehemently opposed by the San Antonio Conservation Society.

“Having more than just the facade is the greater goal,” said Pemberton, who’s a former president of the conservation society.

When asked about whether a story of the Woolworth lunch counter being the first integrated lunch counter in America would be told, Alamo CEO Douglass W. McDonald said they would need to gather more information on its history.

“It’s all part of the study. We know that it was in the basement. We know there was a lunch counter … As we go down the road, we research this.” 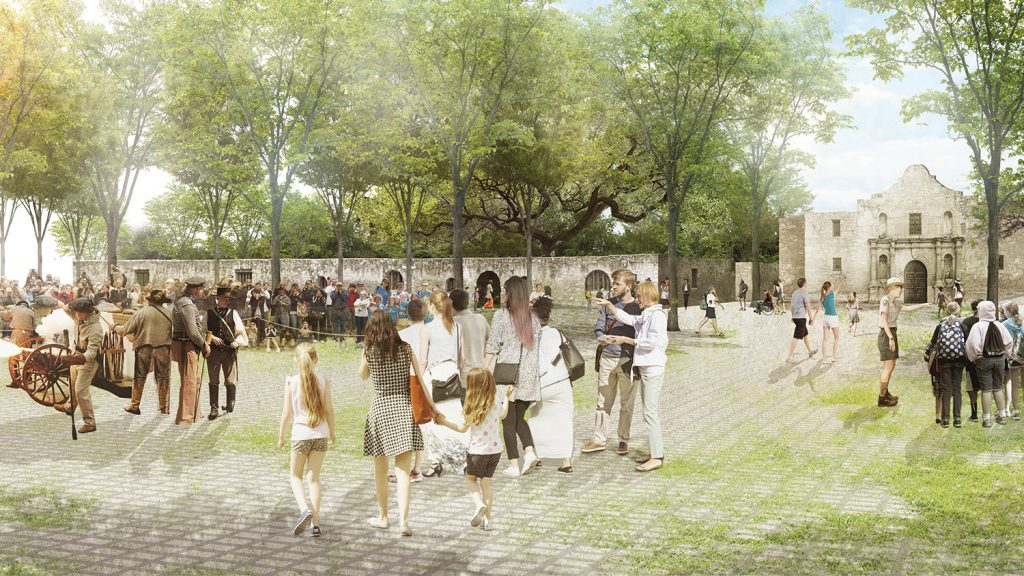 » Finally, Alamo Street within the plaza would close, as well as portions of Houston and Crockett streets with an aim towards redefining the 1836 footprint of the Alamo complex.

The 29-member Alamo Citizens Advisory Committee is scheduled to vote on the recommendations at 6:30 p.m. Thursday at City Council chambers in the Municipal Plaza building, 105 Main Plaza.

The plan will also be presented to the Planning Commission and the Historic and Design Review Commission, before landing in front of City Council on Oct. 18, Treviño said. Specifically, the Council’s purview is whether to lease city-owned plaza property to the state, and on the Alamo and Houston streets closures.

Renderings and graphics courtesy of the Alamo