Not all preservation fights are public, drag out affairs.

In the Government Hill neighborhood, just north of downtown, there is a circa-1922 house at 705 E. Grayson St. that was built by a prominent San Antonio doctor and that’s less than a block from all of the restaurant and bar action that’s creeping into the neighborhood from Broadway.

In February, the property’s owner, developer Pat Biernacki, submitted a demolition request to the city.

Since then, the city’s Office of Historic Preservation (OHP), the Historic and Design Review Commission, the San Antonio Conservation Society, the Government Hill Alliance, and AIA San Antonio have come out in opposition of the demolition request. In response, OHP submitted a request to begin the process of labeling the house-turned-apartments a historic landmark.

But on Thursday, with no real discussion, the City Council voted to deny the request.

To understand why this is important, let’s do some reverse engineering.

Jefferson Bank plans to build its headquarters on the northeast corner of Broadway and Grayson Street, the San Antonio Express-News reported in late June. The only structure in that square block that will remain untouched is the Still Golden Social House bar. The remaining buildings are an old mix of commercial and residential.

But not all structures there will be demolished. Three shotgun-style homes (below) on North Alamo Street will be moved to 705 E. Grayson St., once the 1922 two-story apartment house is demolished, said attorney Patrick Christensen, who represents Biernacki as well as Milam Real Estate Capital, the S.A.-based developer behind Jefferson Bank’s headquarters. 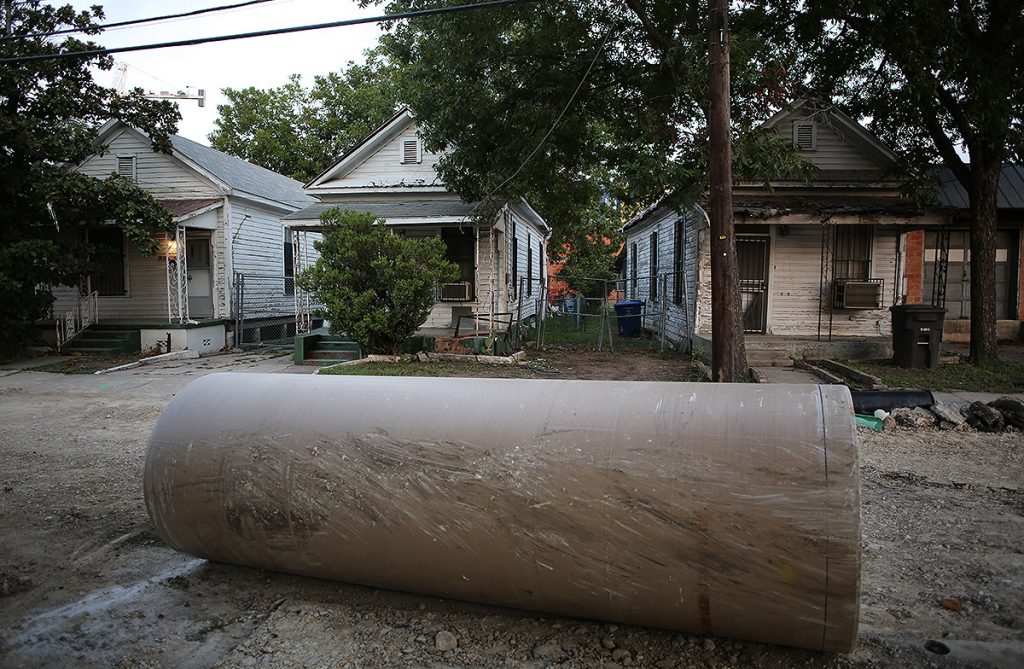 Typically, these types of historic preservation battles tend to take on a life of their own. (In 2015, I covered one a block up Grayson Street that involved the same actors — the Government Hill Alliance vs. Biernacki.) But this one, not so much. All of the opposition flew under the radar.

“The house is also a fine example of Colonial Revival styling with its side gable roof, central plan and symmetrical facade of multi-light windows with shutters,” Conservation Society President Susan Beavin said in a statement that was read to the Council. “The classical entrance featuring paired columns, a Classical pediment, and entrance doors with sidelights and a lunette toplight make it a rarely detailed example of this style in San Antonio.”

In an email to OHP, Allison Chambers of the local AIA San Antonio made the point that there are many vacant lots in Government Hill where the three shotgun homes could go.

Government Hill Alliance president Rose Hill said many in the neighborhood would like to see the home moved.

“It’s not dilapidated,” Hill said. “It’s a very historical home, and has a lot of potential.”

As far the Jefferson Bank project, construction isn’t expected to begin for another three years or so, said Lindsay Armstrong, the bank’s senior vice president and director of marketing.

The mid-rise is expected to be 13 to 15 stories tall, and will include retail space on the ground floor for restaurants, shopping, etc., Armstrong said.

Jefferson Bank is expected to occupy about half of the floors, and the remaining space will be available for other tenants. It would consolidate its headquarters and administrative personnel from 11 other banking centers into one building — about 200 to 300 workers overall — Armstrong said.