Luminaria, downtown’s largest arts festival, will envelope Hemisfair and, for the first time, Mission San Jose with art in all forms, artists of all ilk this weekend.

The big day is Saturday when hundreds of artists will occupy Hemisfair from 7 p.m. to midnight. The festival continues Sunday with art workshops and brunches at Hemisfair during the day, and a performance by chamber group Agarita and artist Chuck Drew in the evening at Mission San Jose on the South Side. 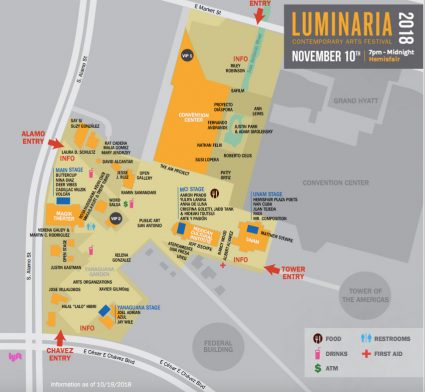 This year, three quarters of the artists are from San Antonio in tribute to this city’s tricentennial celebration. There are more than 52 groups represented over the two days, but the number of artists range in the hundreds, Armstrong said.

On Saturday night, the main stage includes performances by Volcán, Nina Diaz and Buttercup, among other musical heavy-hitters. Other stages will feature more music, theater, poetry, dance and other performing arts.

“A really magical place this year will be along the River Walk near the Convention Center,” Armstrong said. “There will be an operatic piece performed down there; there will be interactive art.”

Browse our slideshow or visit Luminaria’s site to learn more about the featured artists.

From 11 a.m. to 3 p.m. Sunday, Community Arts Day at Hemisfair will be composed of workshops, including one on DJ-ing and another on glass blowing, and brunches offering folks a chance to meet the artists. It will also include an artists market with CDs and artwork for sale. The brunches cost $35 each. A $5 donation is suggested for the workshops. Visit Luminaria’s Sunday schedule for more info.

“It’s a very ambitious program to get access to a historic site of that caliber, and to be able to have artists interpret that site and our history is pretty phenomenal,” Armstrong said. “That doesn’t happen every day.”

Chocollazo, the chocolate and candy shop on Broadway, has been selected as Hemisfair’s latest tenant and is expected to open by Valentine’s Day.

The shop will join Paleteria San Antonio in the Pereida House, which faces Yanaguana Garden and South Alamo Street. Walking in from Alamo, there will be two rooms—one full of truffles, hand-painted chocolate bars, chocolate chip cookies, you get the idea; and another called Sugar Sugar, which will offer rows upon rows of candy.

“Within that house you cannot leave without finding something to satisfy your sweet tooth,” said Mary Collazo, Chocollazo owner and chocolatier. In 2013, she and her husband Frank, who runs operations, launched Chocollazo as a food truck. They opened a location at Lackland Air Force Base in 2015, and their flagship shop and commissary at the Boardwalk on Broadway in 2016.

At Hemisfair, items will range between gummies priced at less than $1 to gift baskets and other custom treats up to $100. The average sales price at Chocollazo’s Broadway location is $8, according to the Collazos.

The Collazos and Hemisfair are negotiating a three-year licensing agreement with two three-year extensions. They would join Dough Pizzeria, Con Safos Cocina y Cantina, CommonWealth Coffeehouse & Bakery and the paletería in what is becoming a mini culinary destination at Hemisfair.

At Hemisfair’s board meeting on Friday, Director of Real Estate Omar Gonzalez said that Paleteria’s slow season is Chocollazo’s high season: roughly between November and February.

“It’s really about getting people in that building, and if they don’t buy a paleta on that trip, they know they can come back in the summer,” Gonzalez told the board.

Hemisfair is also considering Trina Johansen, owner and co-creator of Blue Cat Yoga and Healing Arts, for the second floor of the Schultze House near the gazebo.

“What we really like about yoga, one it can be done anywhere, sure you have a yoga studio up here, but you’re also welcome to go out in to the park,” Gonzalez said. “We also like that it’s one of the uses that’s really compatible with many of our events.”