This post has been updated with the outcome of the Zoning Commission vote.

The property at 1900 Broadway, known by cocktail aficionados as Still Golden Social House, is under contract to be sold and incorporated into the future Jefferson Bank headquarters building, the project’s developer confirmed. The sale would mean Milam Real Estate Capital, which is developing the mid-rise office building for Jefferson Bank, would control the entire square block on the northeast corner of Broadway and East Grayson Street (which is also bound by East Josephine and North Alamo streets).

This afternoon, the Zoning Commission unanimously approved rezoning the property so it’s consistent with the other parcels on the block. The case now goes to the City Council for consideration at its Thursday meeting.

A site plan included in the rezoning application shows an office building taking up the entire square block (including where Still Golden currently stands). A retail space is planned for the corner currently under review; additional retail will face East Grayson, Broadway, and East Josephine. 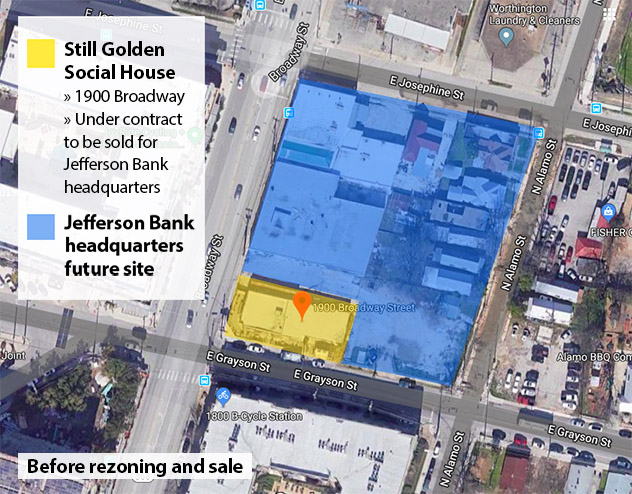 Which begs the question: What will happen to Still Golden Social House?

“We are in discussions with Still Golden, and we want them to be part of the project,” Carr said. “We are very much pro local businesses. Absolutely.”

Still Golden opened in March 2018 as a kind of reincarnation of Stay Golden, Peña and co.’s ice house-ish bar adjacent to the Pearl, which closed to make room for Credit Human’s own 10-story headquarters facing Broadway.

Details on Jefferson Bank’s headquarters remain scarce. In a previous interview, Lindsay Armstrong, the bank’s senior vice president and director of marketing, said the building’s height could be between 13 to 15 stories. The bank is expected to occupy roughly half the space—between 200 to 300 workers total—while leasing the rest to other tenants.

Carr declined to give the project’s cost, as well as a construction start date, but said he hopes to complete it by first quarter 2022.