The development group behind the envisioned 253-unit St. John’s Square apartments near La Villita has struggled to secure a construction lender during the pandemic, an official with the San Antonio Housing Authority (SAHA), which is a partner in the project, told the agency’s board last week.

The partnership, which is being lead by Austin developer Dennis McDaniel, wants to build an eight-story, mixed-use development while leasing the bulk of the 1.3 acres of land at 410 E. Nueva St. from neighboring St. John’s Evangelical Lutheran Church for 99 years.

The project will include 253 units—200 luxury apartments and 53 reserved for people making 50% of the area median income or less. Fifty of the 53 affordable units will be offered to residents enrolled in a federal voucher program called Moving to Work.

“We’ll work with employers in the downtown area in order to provide those jobs that actually have a pathway to increase their income and progress in their employment,” Lorraine Robles, SAHA’s director of development services and neighborhood revitalization, told the board last Thursday.

For the affordable units, rents will be capped at $621 for studios, $665 for one-bedrooms, and $798 for two-bedrooms. Those who rent these apartments will not pay more than 30% of their income on rent, and will also receive utility allowances between $76 and $125.

SAHA will contribute $375,000 in an annual subsidy to help offset the lower rents.

[ Editor’s note: The affordable rents are capped by the U.S. Department of Housing and Urban Development. If they seem high, we suggest you read our analysis of how area median income works. The market-rate rents are unregulated, hence the name, and are projections from a market study the partnership completed some time in 2019. Also, this data was pulled from the St. John’s Square incentives application packet, which you can read here. ]

For its part, SAHA is seeking up to $60 million in tax-exempt low-income housing bonds through the state. SAHA had received initial permission to issue the bonds, but the agency either couldn’t find a construction lender, or found one that backed out, and the state’s 180-day deadline came and went. Last Thursday, Robles and her team asked the SAHA board for another “inducement” document, which is required in order for SAHA to restart the process of procuring the bonds.

In a brief interview Monday, McDaniel said he hopes construction will start the first week of December.

According to the project’s pro forma, or financial document, St. John’s Square is expected to yield $594,012 after the first year of operation, and a cumulative net cash flow of $15.5 million after 15 years. The partnership split in terms of profit is unclear.

SAHA’s critics say it’s abandoning its mission to provide roofs over the heads of San Antonio’s most vulnerable by partnering with for-profit developers, like McDaniel, who build market-rate—or just below that—housing. Conversely, SAHA contends its recent strategy to partner with private developers does achieve those goals of more affordable housing. Its partnerships with private developers is producing more below market-rate housing than the agency could build alone, and the revenues will subsidize more deeply affordable housing down the road, rehab existing affordable housing stock, and reinforce SAHA’s social services programs, the agency says. We’ll explore this incredibly complex strategy in the near future. For now, continue for more details on St. John’s Square. 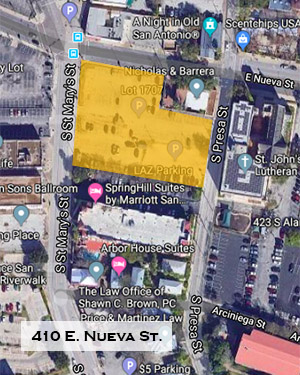 The design for St. John’s Square received approval from the Historic and Design Review Commission (HDRC), under the condition the architect, Mark Odom Studio of Austin, work on lessening the contrast color-wise between the base and the body. After the vote, Mari Michael Glassell, studio director at Mark Odom Studio, said construction is expected to begin in May and take 22 months to complete.

March 20, 2019
Without discussion, the Historic and Design Review Commission (HDRC) grants approval to the St. John’s Square project. New details emerge: 50 units—or 20% of the 251 total units—will be reserved for people who make 50% of the area median income. The rest are presumably market-rate. Read more.

Aug. 2, 2018
In the first public discussion of St. John’s Square, the San Antonio Housing Authority board of commissioners votes to pursue 4% low-income housing tax credits for the project. The basic figures—eight-story development, 250 apartments, upwards of $50 million to build—are released. The Law Offices of Nicholas & Barrera, the only standing structure on the lot, which sits on the corner of South Presa and East Nueva streets, will not be demolished.

February 2018
McDaniels signs 99-year lease with St. John’s Lutheran Church on the property at 410 E. Nueva St. As part of the agreement, the church will receive some of the parking spaces.