The City of San Antonio has opened an investigation into a Northside apartment complex for submitting potentially fraudulent applications to the emergency housing assistance program, which helps keep tenants and homeowners whose incomes have been impacted by Covid-19 from being evicted.

Icon Apartments, which is located in District 9, behind Winston Churchill High School, is owned by a California real estate firm called Bellaire Partners.

The City Auditor and City Attorney’s offices were soon notified and they determined the irregularities weren’t originating from the Neighborhood & Housing Services Department, which oversees the program.

“The property is the Icon Apartments and staff confirmed that several of the applications were legitimate but several applications seemed to have falsified documentation,” Houston wrote.

Houston said the San Antonio Police Department has been notified, and that an investigation has been opened. It’s unclear whether the investigation is being conducted by the Neighborhood & Housing Services Department (NHSD) or the police department. 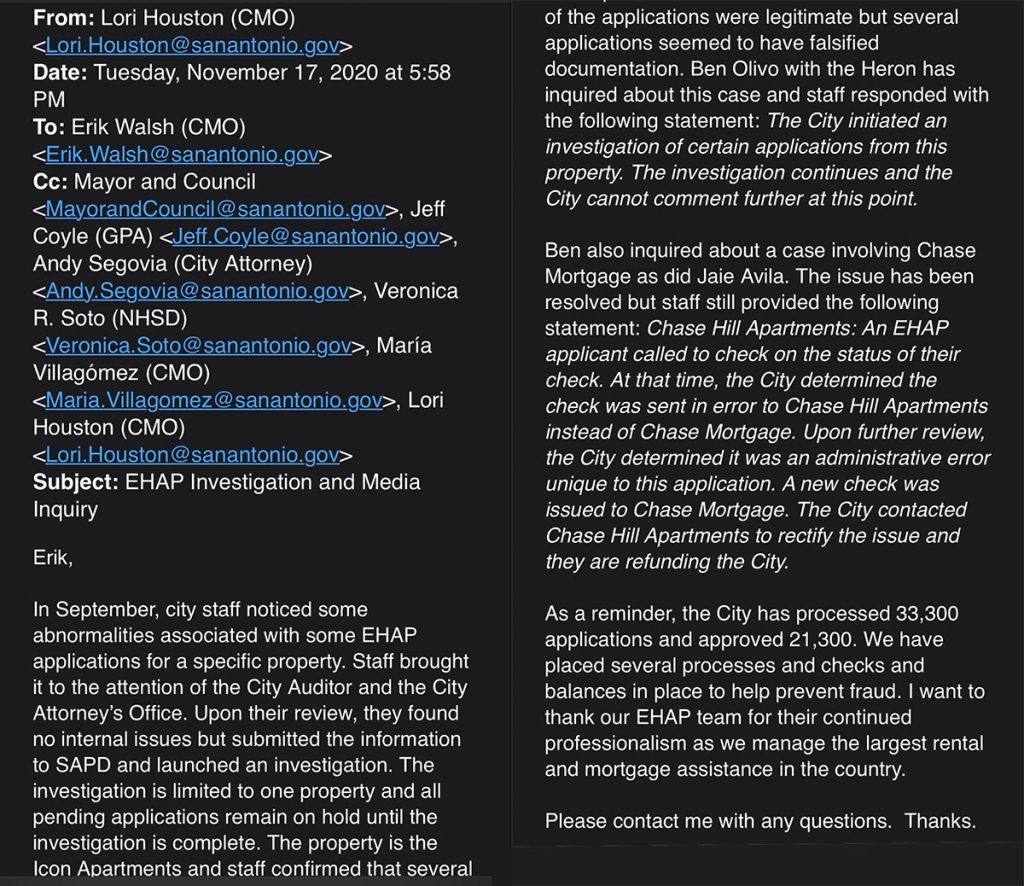 It’s also unclear how many applications from Icon Apartments are thought to have fraudulent information.

According to city records obtained by the Heron, properties with some variation of “Icon” at the beginning of the name have received funding for at least 87 applications submitted into the city’s program. On average, $2,752 has been doled out per household, according to city data.

In a text to the Heron, Houston said she cannot comment on an open investigation.

The emergency housing assistance program, also known as EHAP, helps San Antonio households pay rent or their mortgage, along with other cost-of-living expenses. Since late April, when the City Council approved the program, $58.8 million has been disbursed to 21,384 household impacted by Covid-19.

By the city’s count, 57,411 people have been assisted by the program. The vast majority—85%—are renters.

NEED ASSISTANCE?
» To apply for the City of San Antonio’s emergency housing assistance and right to counsel programs, click here.
» Call the St. Mary’s University hotline at 210-570-6135 if you need legal advice.
» Browse the city’s other Covid-19 relief options

In a follow-up email Tuesday, Houston said the city is working with two apartment complexes to recover funds from two separate cases—and in both cases “the landlord has agreed to refund the City.”

When asked about what the city is doing to prevent bad actors from abusing the system, Houston said, ”

The City has established policies that require documentation to be provided to determine eligibility and ensure assistance is provided appropriately. The City requires every applicant to provide identification, proof of COVID related hardship, income documentation, current lease or mortgage statement. The City staff reviewing documents are trained to review all documents in the application package if staff has any concern with what is submitted supervisors are available on-site to review and provide guidance.”

‘This is the first I’m hearing about it’

Bellaire Partners owns six properties in San Antonio. Its portfolio is composed of Texas apartment complexes with the exception of one property in Milwaukee.

Bellaire Partners president George Lintz did not respond to an interview request Tuesday via email.

On Tuesday, a woman working at Icon Apartments said she was unaware of the investigation by the city.

“We don’t know anything about it,” said the woman, who declined to give her name. “This is the first I’m hearing about it.”

She said “a lot of residents” use the city’s housing assistance program. “We get them set up, they can use the computers back there (to apply),” she said.

Shortly after our visit to Icon Apartments, a woman named Gloria Garcia called the Heron from a blocked number and said she was a regional manager for the company that owns Icon Apartments, but declined to give the name of the company. She said she couldn’t answer questions, but was calling to gather information.

District 1 Councilman Roberto Treviño, who’s been the program’s biggest champion on the council, declined to give a statement on Tuesday because he was still gathering details.

“However, this is yet another example why things like the Renter’s Commission and Direct Cash Assistance are so vital for housing stability,” Treviño said via text. “We need to ensure that we are being diligent in providing the funds and support directly to those who need it and eliminate inexcusable abuse of a system meant to help our community.”

District 9 Councilman John Courage did not respond to interview requests on Tuesday.

Treviño has argued more local dollars be allocated for housing assistance, because the city has more flexibility on how those dollars can be spent, as opposed to restrictions on federal funding. The assistance program is predominately funded using federal coronavirus relief funds, although city officials are finding more local dollars, such as another $500,000 that was recently approved by the San Antonio Housing Trust.

Some housing advocates say the checks should go directly to the tenant, rather than to the landlord—which the city determined it cannot do with federal funding.

Since it was launch in late April, the program has had hiccups.

According to NHSD, an emergency housing assistance applicant recently called the city to check on the status of their check. NHSD admits the check was sent in error to the Chase Hill Apartments, when it should have been made to Chase Bank’s home lending division.

“Upon further review, the City determined it was an administrative error unique to this application,” NHSD Director Veronica Soto said in a statement. “A new check was issued to Chase Mortgage. The City contacted Chase Hill Apartments to rectify the issue and they are refunding the City.”

In July, the Heron reported some recipients waited several weeks for their landlords to receive assistance checks. Since then, NHSD appears to have streamlined the process.

According to an Oct. 12 audit of the housing assistance program, the average number of days between receiving an application and when a decision is made by NHSD has decreased from 51 to 11 days. The City Auditor attributes the more streamlined process to larger staff processing applications, among other factors.

WOAI-TV’s Jaie Avila recently reported that some checks for back-rent were being sent to the wrong address, putting both tenants and landlords in a bind. The city told the station that of 16,390 housing assistance checks disbursed, 599 failed to reach their correct destination.

After reading this Heron article, Houston followed up via email with this clarification:

“The WOAI-TV report was referring to returned checks that the City has received,” Houston said. “Checks can be returned for various reasons including apartment leasing offices being closed during the pandemic and mail returned to the City as sender, landlords returning because tenants have moved out or they would like verification on which unit to apply a credit and checks sent to incorrect leasing address.”

Soto told the TV station the city doing its best to improve customer service given the fact that it’s using temporary employees and re-positioned library staff for such a large-scale social program.

In August, sociologist Matthew Desmond, author of “Evicted: Poverty and Profit in the American City,” wrote in The New York Times about a San Antonio couple who moved from their home despite being approved under EHAP. The landlord, Ricardo Acosta, allegedly cashed the $3,000 check the city had issued, even as the couple moved out.