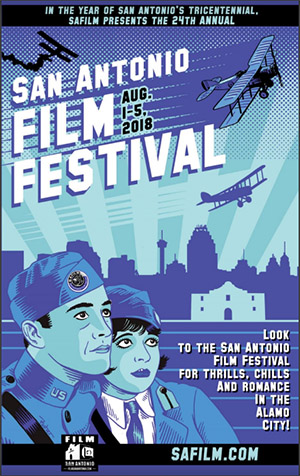 “This is the birthplace of Hollywood in the sense that the first Oscar-winning film was filmed here, ‘Wings,’ at Randolph AFB,” Rocha said. “That kind of carries over to some of the movies we are screening. The films are old Hollywood, kind of like, and then we have the new age Hollywood. I think the films are substantial this year. They’re mostly narrative features, and it was really difficult to get into the festival this year as a film, even for shorts. We turned away a lot of local people and they all hate me, I’m sure. It wasn’t me, it was the panelists.”

The festival, which is run all by high school and college students, opens tonight and runs through Sunday.

» Fred Roos, longtime Hollywood producer and casting director, brings three feature-length comedies for the San Antonio audience: “Stella’s Last Weekend,” 9 “Benched,” and “Making Babies.” For a better sense of Roos’ prominence, read this EW article that explains how if it weren’t for Roos, someone else not named Harrison Ford may have played Han Solo in “Star Wars.”

» San Antonio legend Jesse Borrego will receive SAFILM’s Legacy Award at a ceremony Saturday night. Every day of the festival, one of Borrego’s films will be screened.

Tickets range from $11 to $16 and can be purchased at the door or at TobinCenter.org. VIP, weekend and day passes are also available.