Designs for a $45.6 million mixed-income apartment project north of the Lavaca neighborhood, which would be the fourth in the area by the San Antonio Housing Authority, received conceptual approval from the Historic and Design Review Commission on Wednesday. 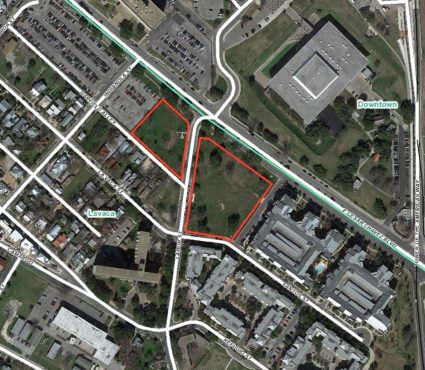 The project will consist of 215 apartments, a pre-cast parking structure, and four retail spaces on two parcels at the corner of East César E. Chávez Boulevard and Labor Street. The development also includes 11,000 square feet of amenity space for its residents, as well as the public.

A five-story brick-clad facade will face Hemisfair and the rest of downtown to the north. The development’s height reduces as you head toward Lavaca’s single-family homes. Labor Street will turn into a mini commercial corridor with the project’s four retail spaces and a public courtyard. Four two-story townhomes are also included and will face Garfield Alley.

SAHA expects to break ground on the project, which it’s calling 100 Labor Street, for now, in August 2019, and be completed in April 2021.

SAHA is pursing a HUD 221 (d)(4) loan to help fund the project, which the housing authority will own outright, officials said. Franklin Development is a partner, and will build the complex and manage it the first few years.

“That voucher doesn’t travel to other developments or other properties,” said Tim Alcott, SAHA’s Real Estate and Legal Services Officer. “That voucher is tied to that property.”

The voucher pays for a third of the rent.

Alcott said the quality of 100 Labor Street will be that of a typical market-rate development.

“When you walk in this, it has very high amenities,” Alcott said. “And it will be built in a way where people don’t know that there’s any affordability in there at all.”

“It provides them a firm foundation to have stable housing and to have a stable job,” Nisivoccia said.

Nisivoccia and Alcott said community meetings with the Lavaca neighborhood have been ongoing for years over this project. The housing authority tried to find a balance between the affordability-market rate ratio offered at 100 Labor Street with the mix offered at SAHA’s neighboring projects.

For example, there is the 100-percent affordable Victoria Plaza, an older nine-story building for seniors and disabled people that is currently undergoing a $17 million renovation just south of the 100 Labor Street properties.

“We’re always trying to be a good neighbors,” Nisivoccia said. “We believe the amount of affordable units we’d be offering is sustainable for the housing authority. It is also something the neighborhood has gotten behind and advocated for in our plans and discussions with them. It was warmly received by 95 percent of the crowd at (the last) public meeting (in November).”

Cherise Rohr-Allegrini, president of the Lavaca Neighborhood Association, said the neighborhood likes how the development blends in, and that it’s mixed-income.

“This will have a lot of public area,” she said. “The bottom area is meant to be restaurant space, and retail space with some kind of plaza setting.”

Nisivoccia said there’s still room for a fifth development on a large parcel of land between Refugio Place and Lavaca. In February, SAHA will be posting a request for proposals for a development partner for that project.