The City Council unanimously voted Thursday to rezone 2.9 acres at South Colorado and El Paso streets, paving the way for the Alazan Lofts, an 88-unit mixed-income development by the San Antonio Housing Authority (SAHA) and Cleveland-based developer NRP Group that has stirred debate about how best to revitalize the West Side.

Some neighborhood groups have pushed back on the plan in recent weeks with concerns the complex’s size, which will rise four stories in some parts, will disrupt the fabric of the West Side’s more modest structures.

They’re also concerned about SAHA’s master plan to demolish the Alazan Courts’ 501 units, which sit on 26 acres just north of the lofts site, and replace it with a new mixed-income community. SAHA would be breaking up a community, for a mix of apartments that would include public housing, but also market-rate housing, the groups contend.

SAHA has told residents of Alazan Courts they can stay on the West Side, if they choose, my moving into the Alazan Lofts, or into other mixed-income developments it plans to build in the vicinity; they can wait until the larger Alazan Courts master plan is completed in phases; or, they can choose a Section 8 voucher and move away from the West Side. 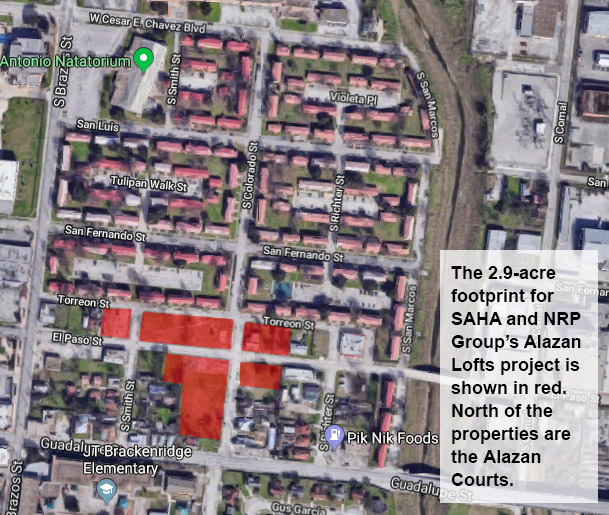 On Thursday, Councilwoman Shirley Gonzales wrote an op-ed in the San Antonio Express-News in support of the $18 million Alazan Lofts, which will consist of 88 units—40 public housing, 40 affordable and eight market-rate.

“Where studies show poverty, I see a community with untapped potential, with an entrepreneurial spirit and self-reliant energy,” Gonzales wrote of the West Side.

At Thursday’s meeting, Gonzales could have pulled the item from the council’s zoning consent agenda, an action that would have allowed the council to vote on the project individually. Instead, she kept it on the consent agenda and forced the council to vote on the bulk of the cases at once. This, despite a lively discussion from more than 20 people who signed up to speak. The debate in the council chambers was nuanced. Some said they supported the project because it will result in new affordable housing, but they also took issue with its execution. In the end, the discussion leaned slightly in favor of folks from the community who wanted aspects of the project altered.

Gonzales has been advocating for the project since January. Then, she asked her fellow council members who serve on the five-member Comprehensive Plan Committee to offer only one letter of support—to the Alazan Lofts project—in the process of applying for 9 percent low-income housing tax credits, which are sold to investors for cash in exchange for a tax break. Normally, those letters go to multiple affordable housing projects around the city. This year, those other projects received letters of no objection—better than no letter at all, but not the ringing endorsement of a support letter.

[ Read the application to the Texas Department of Housing and Community Affairs (TDHCA). ]

The low-income housing tax credit process is highly competitive, and Gonzales made the unprecedented maneuver to boost Alazan Lofts’ chances at being awarded the tax credits.

She has also been heavily criticized by some of the West Side groups of not listening to their concerns, and not meeting with them face to face. That tension and frustration among some in attendance was brought front and center during the meeting on Thursday.

Leticia Retamozo of the Westside Resident Neighborhood Association told the council her group was being portrayed as one averse to change, and that SAHA, NRP Group and Gonzales were supporting the lofts project as one that is best for the community.

“No! Do not present this project as a benevolent gesture for the community and its residents,” Retamozo said. “This is about the need for prime real estate and the profits that others will make from this and other such housing projects.”

During an interview after the meeting, Jason Arechiga, NRP Group’s vice president of development, said he didn’t know what the developer’s profit would be because those numbers are fluctuating as the project changes. When asked for a ballpark figure, he didn’t provide one.

Before the meeting, Tim Alcott, SAHA’s real estate and legal services officer, said SAHA expects revenue from the operations of the lofts, but said it was minimal, in the range of $200,000 for the first year. Projects like the Alazan Lofts aren’t designed as cash cows, he said, because of their deeply subsidized units. Rather, they are designed to generate enough money to maintain the project.

Amelia Valdez, president of the Westside Resident Neighborhood Association, told council members the history of the West Side was being overlooked and disrespected.

“Would the city allow such a development in King William or Monte Vista?” Valdez asked. “I say not.”

Jannet Garcia, who serves as president of the Alazan Apache Resident Council, expressed support for the lofts. A single mother of two small children, Garcia has been the most vocal among the residents of the Alazan Courts.

“Sometimes change is good and in this case, it is,” Garcia said. “I believe that this place is the start of a new time for a community stuck in the past—which, our past is great. It built us, but at some point our ancestors made a choice to change, because if we didn’t we would never grow. It’s time to let the growing happen again.”

SAHA bused Garcia and others residents of public housing in other areas, not just from the Alazan Courts, to the meeting. One of them was Abigail Castillo, who’s lived at the Cassiano courts for four years, and who talked about bettering the West Side’s image.

“I see that if we can change our neighborhood and our community, people will start realizing that we’re not just something you pass by and don’t acknowledge,” Castillo told the council.

Several times during the meeting, members of the preservation groups told the council the four-story height of the Alazan Lofts, in some places, violates the Guadalupe Westside Community Plan, which calls for low-density development on the properties in question. At Thursday’s meeting, SAHA officials echoed what some members of the Zoning Commission said weeks earlier: Neighborhood plans are a guide, and that the properties in question that comprise the lofts site were already zoned for high-density residential, anyway.

There was also some question as to whether SAHA and NRP Group mislead the TDHCA in pursuit of the 9 percent low-income housing tax credits by listing the Avenida Guadalupe Association as the neighborhood group in support of the project. Only one group in the area, the Historic Westside Resident Association, is registered with the city.

In a response on Friday, the TDHCA said a developer can list any group registered with the county or state of Texas, which the Avenida Guadalupe Association is.

Related
» How best to revitalize Alazan Courts and the near West Side? It’s complicated.
» “Controversial Alazan Lofts gets boost from a reluctant zoning commission”