The San Antonio River Authority is seeking a replacement for the failed “Plethora” sculpture, the art centerpiece for San Pedro Creek Culture Park that is supposed to be standing at the Plaza de Fundacion at North Santa Rosa Street. 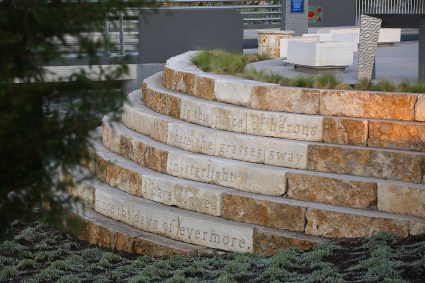 “Plethora’s” budget was originally set for $735,000, but costs skyrocketed to $1.5 million when Spanish artist Jorge Rodriguez-Gerada changed the materials and structure. The giant face was supposed to have been finished in time for the Tricentennial celebration in May. The river authority canceled the piece, but not before $257,250 was already spent — $122,750 of which was spent on the concrete base (right) that currently rests sculpture-less at the Santa Rosa intersection. The remainder of of the funds spent went towards the project’s engineering and the artist’s time.

Rodriguez-Gerada did not respond for a request for comment.

With $477,750 left in the project’s budget, the river authority is seeking an artist or team of artists to create a piece that will commemorate San Antonio’s 300th celebration — one the river authority hopes will be able to stay within the remaining budget. The request for qualifications (RFQ) was issued July 30.

The new artwork could potentially be placed on the already-existing concrete base depending on the piece that is made.

The deadline for artists to answer the RFQ is Aug. 30. Finalists selected will be given a $2,500 honorarium to develop a proposal and submit it by Oct. 24. The money used for the honorarium has been taken out of the remaining budget.

Carrie Brown, the river authority’s public art curator, said the new RFQ has slightly been altered from the first RFQ that was released in 2016.

“It’s a new opportunity so the document was updated,” Brown said. “Mainly the budget is smaller and the details of the project site are different now that the park is open and in use.”

The artist is scheduled to be selected in November and the artwork is slated for completion in Winter 2019.