The San Antonio Housing Authority (SAHA) is hosting a design workshop for the Alazan Courts redevelopment on the near West Side, San Antonio’s oldest public housing community that could be demolished and rebuilt, or refurnished—depending on the outcome of a months-long public engagement process.

So far, the firm has held four meetings with residents of the Alazan Courts, three meetings with other members of the community, and an open house.

The design workshop is being described by SAHA officials as hands on, where participants will be able to reposition Lego-like blocks around to their desired design.

In recent years, the redevelopment of Alazan Courts, and its 501 public housing units, had been a hot topic. Under previous leadership, SAHA’s plan was to demolish the courts and rebuild them a mixed-income community, borrowing from the Hope VI program of the Clinton administration (under then-U.S. Department of Housing and Urban Development [HUD] Secretary Henry Cisneros) and later the Choice Neighborhood program of the Obama administration.

Examples of this method of de-concentration of poverty in San Antonio are the Victoria Courts into Victoria Commons (downtown), the Wheatley Courts into East Meadows (East Side), and the San Juan Homes into San Juan Square and the Gardens at San Juan Square (West Side). Housing advocates and SAHA were entrenched in a bitter dispute over the strategy.

Then, the current SAHA CEO and president, Ed Hinojosa Jr., took over the agency—first on an interim basis in January 2021, then officially in July of the same year.

His first big announcement was that SAHA would look to preserve all 501 public housing units at Alazan, if not increase the total. The new direction ameliorated tensions between the agency and housing advocates.

[ Heron Archive: New plan for Alazan Courts: SAHA intends to keep all residents on site after ‘self-developing’ the property | Jan. 21, 2021 ]

Now that a consensus has been reached—at least, between West Side activists and SAHA—about maintaining all 501 public housing units, the debate is whether to demolish and rebuild Alazan Courts, or rehabilitate the 81-year-old barracks-style units. (Although, it’s worth noting, there are still many who believe the better strategy is to de-concentrate poverty and replace it with mixed-income housing.)

Specifics such as total cost, funding sources, and a timeline will be determined after the public engagement process ends, which is scheduled for October.

“First we need to figure out what the community wants,” SAHA spokesperson Michael Reyes said.

During the housing bond committee meetings late last year, Assistant City Manager Lori Houston said the city of San Antonio would commit to help fund infrastructure upgrades for the Alazan Courts redevelopment. But at a recent City Council meeting, Houston said the city and SAHA had not spoken since. 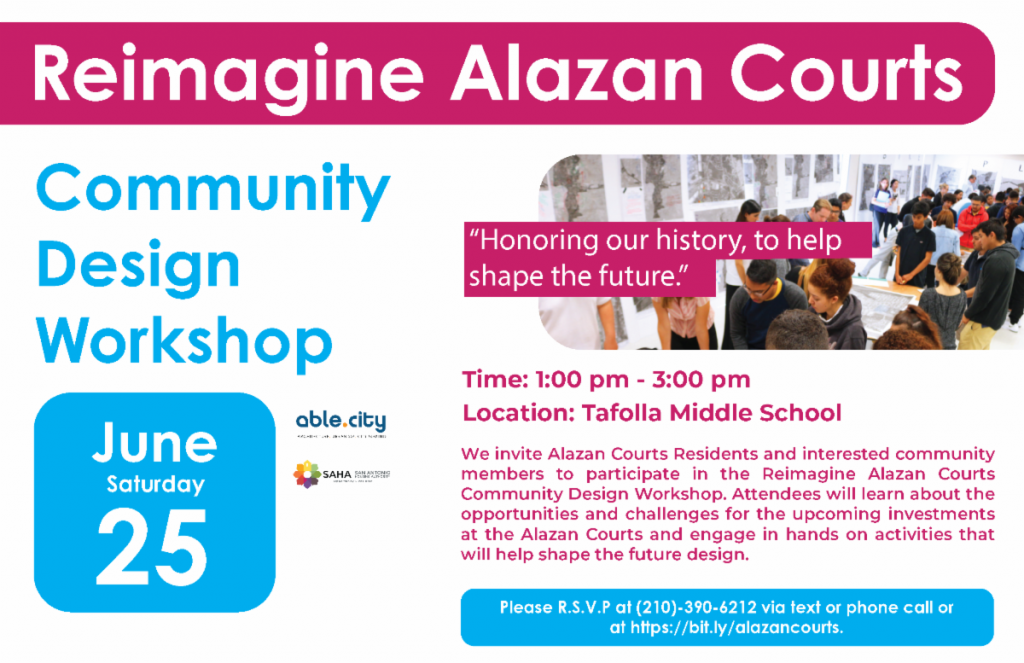 Heron Editor Ben Olivo has been writing about downtown San Antonio since 2008, first for mySA.com, then for the San Antonio Express-News. He co-founded the Heron in 2018, and can be reached at 210-421-3932 | ben@saheron.com | @rbolivo on Twitter
Contact the Heron at hello@saheron.com | @sanantonioheron on Twitter | Facebook | Instagram