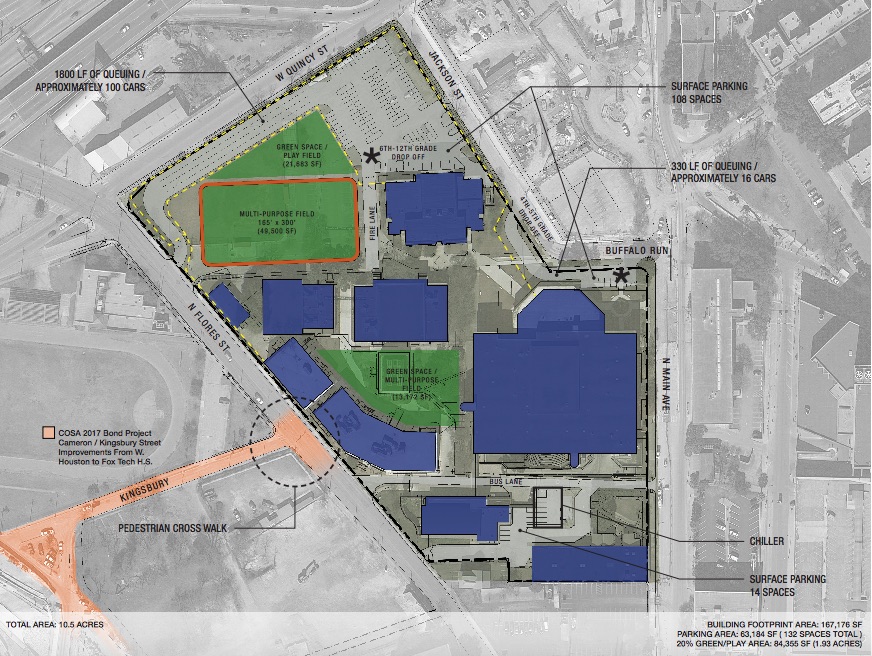 On Wednesday night, superintendent Pedro Martinez led a third and final community meeting on the plan in the Fox Tech cafeteria.

Martinez maintained that the outcome would positively impact students, central office employees, and residents who wish to keep some kind of public recreational access during off-hours.

The plan is two-pronged:

» The district will build a four-level, 150,000-square-foot administrative building on the football field and track that’s separated from the main campus by North Flores Street. Employees and visitors would access the new central office from West Quincy Street or from two points along Camaron Street, a buffer between the buildings and San Pedro Creek Culture Park. This phase features 600 surface parking spaces across two lots — 300 one along Quincy near I-10/I-35 and another 300 farther south on the baseball diamond that faces Camaron.

» A five-level, 600-space parking garage would go up on the Quincy lot. The other lot, on the baseball diamond, would turn into an additional 2.5 acres of green space.

Private, undeveloped property would remain south of the new headquarters, which will include school board and community meeting space.

In February, the SAISD board voted to sell its 4.74-acre, Lavaca neighborhood property, which has housed some of its administrative offices, to Pearl developer Silver Ventures. The district is now leasing back its building to Silver Ventures, and has until August 2020, when the current lease expires, to move into its new headquarters.

Martinez said the district would carefully plan construction — which could begin as early as the beginning of 2019 — around school times. The construction area would be fenced off.

In previous public meetings , community members had lamented the potential loss of green space. Many people walk the track in the evening and on weekends. Parents are concerned there’d be less open space for students to enjoy activities like football or baseball.

“The goal is how to keep as much of the green space that’s available, as possible,” Martinez said. He and other SAISD officials added that the green spaces could help increase foot traffic along San Pedro Creek.

The new green spaces also “gives us flexibility to do something creative,” Martinez added.

The superintendent tried assuring meeting attendees that there’d be plenty of parking for central office and campus employees, as well as for student drivers, after the construction dust clears.

Martinez also said people dropping off and picking up students should have minimal difficulties, if at all, in the mornings and afternoons despite the introduction of hundreds more employees into a compact area. Fox Tech currently has 1,200 students attending the Advanced Learning Academy (ALA) and the Centers for Applied Science and Technology (CAST Tech) schools.

But parents, and even some students, have their doubts regarding traffic and parking. The district continues to receive criticism from community members who think administrators should have been more upfront and proactive with the public about their plans to centralize operations next to Fox Tech.

Grace De la Fuente, a parent of two Fox Tech students, said she’s afraid the district is not accounting for future growth in student enrollment, which means a need for more student parking.

“I’m fully against it because they’re taking benefits away from the kids,” Grace De la Fuente said. “This school is going to grow a lot more from where it is now. It’s just too much traffic that will accumulate here. They should build their central office somewhere else.”

Parent and Our Schools Coalition member YonHui Bell said she understands SAISD’s desire to save $1 million in annual operating costs by leaving the multiple older structures that central office employees currently occupy. But she wishes officials had begun openly discussing the matter much sooner.

“I don’t think any of us question the need for SAISD to consolidate, but we question how the decision was made to build on this property and not on other properties,” Bell added.

Martinez said SAISD wanted to keep its central offices in the district’s geographic center, and on available property that is less cost-prohibitive than in other locations.

The next step is for the school board to review the Fox Tech plan — of which some students such as senior Katarina Tijerina do not see an upside.

“I don’t consider (building the central office) a necessity, it’s more for their convenience than helping students,” Tijerina said. “It’s taking away from us rather than giving back.”