On Thursday, SAHA’s board of commissioners selected Cleveland-based developer NRP Group to build the apartments on the near West Side.

It’s too early to determine the development’s funding sources, what the rents will look like, among other aspects, SAHA officials said. Now that NRP Group has been selected as SAHA’s partner on this project, the two entities will begin to hammer out those details, officials say.

Eventually, the 501 public housing units that comprise the Alazan Courts on 26 acres just west of Alazan Creek will be replaced by a larger community—potentially up around 700 units—said Tim Alcott, SAHA’s real estate and legal services officer.

The new development, which will likely be named something other than the Alazan Courts, will offer public housing units, but it’s unclear how many. It will also include affordable housing at various income levels, as well as market-rate units.

The selection of NRP Group, one of San Antonio’s largest builders of affordable housing in recent memory, almost drew unanimous support from the SAHA board.

The lone nay vote came from Commissioner Sofia Lopez. She said she wanted more of an assurance that the families who currently live at the Alazan Courts can return to the site, if they so choose. She also expressed some consternation over what will amount to a loss of public housing units in San Antonio.

“I consider public housing in this part of the city to be a precious resource, particularly as development just on the other side of the train tracks starts to take off,” Lopez said, referring to the dozen-plus properties in west downtown slated for housing development.

In phases, SAHA will demolish the old tenements of Alazan Courts, a process which could take 5-8 years, Alcott said. In recent years, West Side preservationists have denounced SAHA’s plan for Alazan Courts, saying the redevelopment will break up the existing community and scatter its residents throughout the city.

On multiple occasions, SAHA officials, including Alcott, have said Alazan Courts residents will be offered the chance to return to the near West Side—not necessarily the same streets they live now—at other developments SAHA plans to build. Or, if they choose, they can take a Section 8 voucher and move to another part of town. According to a survey of Alazan Courts families taken roughly two years ago, most said they’d take the voucher rather than stay on the near West Side, SAHA President and CEO David Nisivoccia said.

“We also understand the importance for clients to come back, whether it’s directly to a public housing unit we’re going to be developing on a new property, or whether it’s at Alazan Lofts, or Tampico (Lofts), (or) Artisan at Ruiz,” Nisivoccia said while listing the developments SAHA is planning in the area. Alazan Lofts, in particular, is an 88-unit apartment complex under development next tot he Alazan Courts, which will offer up 40 public housing units.

He also said these projects would receive site-based vouchers, which work like Section 8 vouchers, but can only be used at specific locations.

Lopez said she looks forward to seeing a newer survey of Alazan Courts residents conducted. “Vouchers are not a perfect program, and landlords across the city are not required to accept them,” she said.

“I’m just thinking about the scale of this redevelopment, the number of units that will be public housing units, and then what that means for other people who end up decided to take that voucher, and what that means for their ability to find housing elsewhere,” she said.

[ Previously published: How best to revitalize Alazan Courts and the near West Side? It’s complicated ] 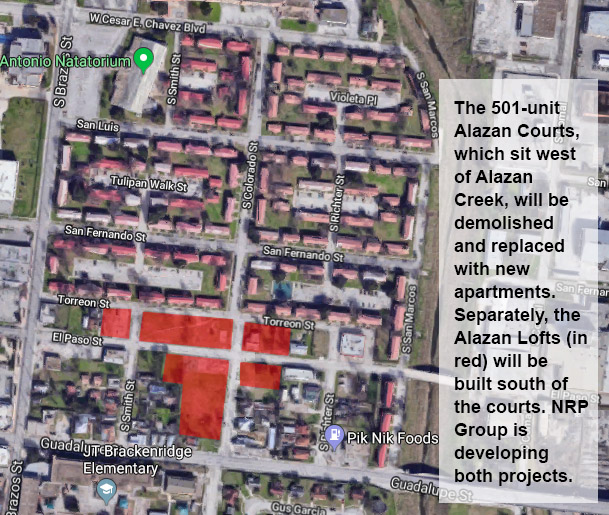 Lopez suggested SAHA wait a few years to see what new programs may emerge should American voters decide to elect one of President Trump’s challengers next year.

“Call me naive, call me hopeful, but we have several presidential candidates who are campaigning on strong housing platforms that’s going to be decided within the next two years,” she said.

Lorraine Robles, SAHA’s director of development services and neighborhood revitalization, said SAHA may still take advantage of those programs given the fact that the project’s first phase is two or three years away from breaking ground.

The Choice Neighborhood grant is a U.S. Department of Housing and Urban Development (HUD) program that would address Lopez’s concerns, as it requires a one-for-one replacement of public housing units in redevelopments, but SAHA’s most recent attempt at procuring the award for the Alazan Courts fell short in early 2018. About four years ago, SAHA received the grant, worth approximately $30 million, which spearheaded the redevelopment of the Wheatley Courts into the East Meadows on the East Side.

SAHA officials said at the meeting they will explore all funding options, including 9 and 4 percent low-income housing tax credits, and private activity bonds, all programs of the Internal Revenue Service; as well as various HUD programs.

The plan is part of SAHA’s strategy in recent years to de-concentrate public housing for mixed-income apartments, like the Wheatley Courts on the East Side, or the old Victoria Courts across from Hemisfair.

Commissioner Marie R. McClure asked Nisivoccia to shed some light on SAHA’s development goals. Currently, the agency is exploring a dozen or so developments across the city. If built, the three largest ones in the central core will have large amounts of market-rate units, typically half, with the other half offering various levels of affordable housing.

Nisivoccia said a “good year” for SAHA would be one in which it completes three developments, “up to about 200 units—maybe a little less or more.”

“If we develop 600 to 700 units per year, is that going to solve the city of San Antonio’s underutilized market for affordable housing? No,” he said. “We’re just a portion of the solution. There are other nonprofit developers who are going to fill that void.”

Commissioner Charles Clack asked about how the reduction of affordable housing units will impact the number of Section 8 vouchers available to the public. Currently, there are 30,000 people waiting for a Section 8 voucher in San Antonio, officials said at a public meeting in August.

“Typically, when we do a redevelopment project, there are things called TPVs, Tenant Protection Vouchers,” Nisivoccia said. “We applied for those vouchers, and typically we will receive them based upon the redevelopment application program.

San Antonio-based Franklin Development Properties and ITEX Development of Houston were the other developers who applied for the Alazan Courts project.