Jefferson Bank has reached an agreement with Still Golden Social House that will keep the popular cocktail bar on East Grayson Street, the bank announced Thursday. The bar will remain open through May 23, at its location on the corner Broadway and East Grayson, then go on a two-year hiatus while the bank’s new headquarters is built.

Still Golden’s aging one-story building, which sits on the corner of Broadway and East Grayson, is the only structure that remains standing on the block; the others have been razed or moved in anticipation for construction. In June, the building will be demolished and Jefferson Bank will begin construction on its $62 million, 13-story headquarters on the square block bound by Broadway, East Grayson, North Alamo and East Josephine streets.

In 2022, Still Golden is expected to move into a retail space, one of four in the new building, on the corner of East Grayson and North Alamo, the bar’s owner Jeret Peña said via text.

Scroll down for more info. 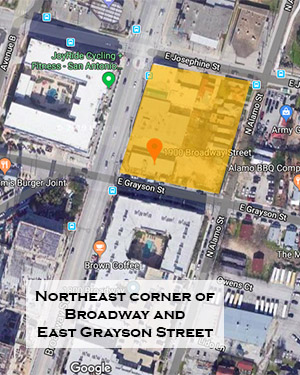