Today, the City of San Antonio is due to formally begin the process of finding developers to build and preserve apartments, and build houses, as part of the $150 million housing bond, which voters approved in May.

But some affordable housing advocates say the city is veering from benchmarks set by its own Strategic Housing Implementation Plan (known as the SHIP) and a bond committee of community members that say the greatest need when building and preserving apartments is for those in San Antonio making up to 30 percent of the area median income (AMI), or, $22,410 for a family of three; and when building homes, families who make up to 60 percent AMI, or, $44,820 for a family of three.

They say the city is rushing the solicitation process, known in the government world as a request for proposals, or RFP, and they fear the current pace will result in housing in the middle tiers of affordability, and not for San Antonio’s most vulnerable families as outlined in the SHIP and by the bond committee.

Meanwhile, Mayor Ron Nirenberg said the process needs to proceed quickly in order to save mixed-income developments that are ready to break ground save for a final piece of gap funding the housing bond could provide, otherwise they could be lost.

Advocates want the process slowed down so that more innovated housing models, those where the majority of the units can be reserved for lower-income households, can be brainstormed and executed. The city’s Neighborhood and Housing Services Department (NHSD) said it’s working with housing groups on such a process, and models could include a community land trust, land banking, the conversion of mobile home parks into resident-owned communities, and increasing the number of accessory dwelling units (ADUs).

For its part, NHSD is reserving roughly half of the funding for apartment rehab and production—more than $75 million—to be dolled out this year, while the other half will be reserved for a second solicitation process in the spring.

Whether the housing projects selected meet the standards of the housing bond remain to be seen.

A list of projects provided last week to the City Council by NHSD Director Veronica Garcia show only 6.8 percent of the 13,476 units in the apartment production pipeline as housing at 30 percent AMI, or below. However, 77 percent of the units in the pipeline are at or below 60 percent AMI, San Antonio’s definition of affordable housing, and one most housing advocates support. Here are the specific pipeline numbers:

But the housing bond, activists point out, describes 30 percent AMI units as the priority.

“The city needs to be planning strategically,” said Leticia Sanchez, co-chair of the Historic Westside Residents Association. “We’re already in a crisis. If you’re just going to rush to do things haphazardly or because there’s a project that’s ready, that just doesn’t address the crisis that we’re in. It’s just going to get worse.”

In particular, advocates are calling out Mayor Ron Nirenberg for pushing the process, which he strongly advocated for at a City Council meeting last week.

“Why are we just rushing to do things, instead of taking a breathe and planning more strategically?” Sanchez said.

Nirenberg’s argument is that, from the bond, the city must build housing ASAP because there are projects in the pipeline that are near-ready, but that are in danger of never being built because the rising costs of construction due to inflation and rising interest rates have created a financing gap. In some cases, government subsidies could be lost if something like the housing bond can’t help them get across the financing finish line.

Two such examples are The Aspire at Vida, a mixed-income development by Mission DG of San Antonio, and another for veterans called Patriot’s Pointe by Liberty Multifamily of Farmers Branch, Texas, and the nonprofit Operation Finally Home. Both, partnerships with the city’s housing nonprofit San Antonio Housing Trust Public Facility Corp., had been canceled because they couldn’t make the financing work.

In June, the Heron reported on another project: Cattleman Square Lofts in west downtown, being planned by nonprofit builder Alamo Community Group, which boasted 100 percent affordability for its 138 units. But it suffers from a $6 million gap which inflation and fluctuating interest rates created, ACG says.

“At the end of the day, we couldn’t fill the gap,” Jennifer Gonzalez, ACG’s executive director, said in a recent interview. “We are essentially going back to the drawing board … We have not walked away from the project. It’s just, in this environment, it’s becoming harder and harder, and more and more evident that we can’t do this without strong public and private partnerships.”

Also, Nirenberg said, it’s important for the city to deliver on this $150 million housing bond before it returns to San Antonio voters in five years requesting approval for the next housing bond.

“There is no 2027 housing bond unless dirt is successfully turned in 2022,” Nirenberg said last week, “and so success is really important not just to ensure we stay on track on the SHIP but to address the immediate crisis at hand.

“I am opposed to slowing this down. It’s gone through many committees. We are right there.”

Housing advocates’ counterargument is that the city would be reneging on its housing bond promise by not delivering apartments that prioritize households making up to 30 percent AMI, as the committee recommended.

It should be noted that the time it takes to conceive a development, acquire the land, and assemble what’s known as the capital stack—or, various sources of funding—can take several years. Alamo Community Group started the process of developing Cattleman Square Lofts in 2019.

It typically takes another two years to build the development.

[ Analysis: Cattleman Square Lofts appears to buttress both Nirenberg and Sanchez’s point. It’s been lauded by everyone for its deep levels of affordability, which have taken three years to achieve. But it’s also ready to go and needs housing bond dollars to help fill its financial gap. ]

It’s also worth noting that from San Antonio’s much smaller 2017-2022 housing bond, which totaled $20 million, three of four projects have been completed. However, one called Four25 San Pedro hasn’t broken ground now five years after voters approved the funding because of pushback from the Five Points neighborhood.

At last week’s meeting, Nirenberg also reiterated a point he’s made recently: housing is needed at all price points in order to address the housing shortage exacerbated by the pandemic. Conversely, advocates say housing bond dollars are rare and therefore precious subsidies that should only be reserved for the lowest levels of affordability, including assisting Opportunity Home San Antonio (formerly known as the San Antonio Housing Authority) with creating more public housing.

In recent weeks, the housing bond RFP process has gone through several revisions as it has traversed San Antonio’s public process, including several meetings of the Housing Commission and City Council subcommittees that address such matters.

Also included in the housing bond is $45 million—nearly a third of the total—for housing rehabilitation, which homeowners can apply for now through Sept. 19.

It also includes $25 million for housing for the chronically homeless population.

The $150 million housing bond is divided into five segments:

In total, San Antonio housing officials have set a goal of 1,300 homes preserved and 1,200 homes created from the housing bond for the next fiscal year.

Committees composed of city officials and community members will select developers and their projects in October, and the City Council is scheduled to grant final approval in December. (Scroll down for a complete timeline.)

In an upcoming article, we’ll dive into the housing bond project selection process, and list the committee members. To view them, download a copy of the presentation given to the City Council last week.

Below, view scoring criteria for each housing bond category.

How will they be scored? 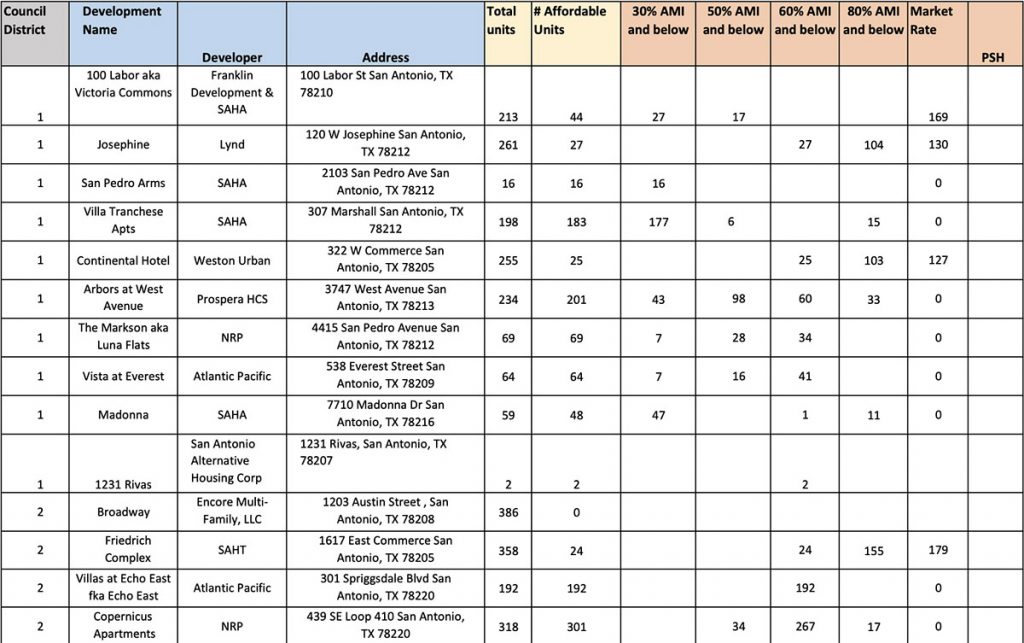 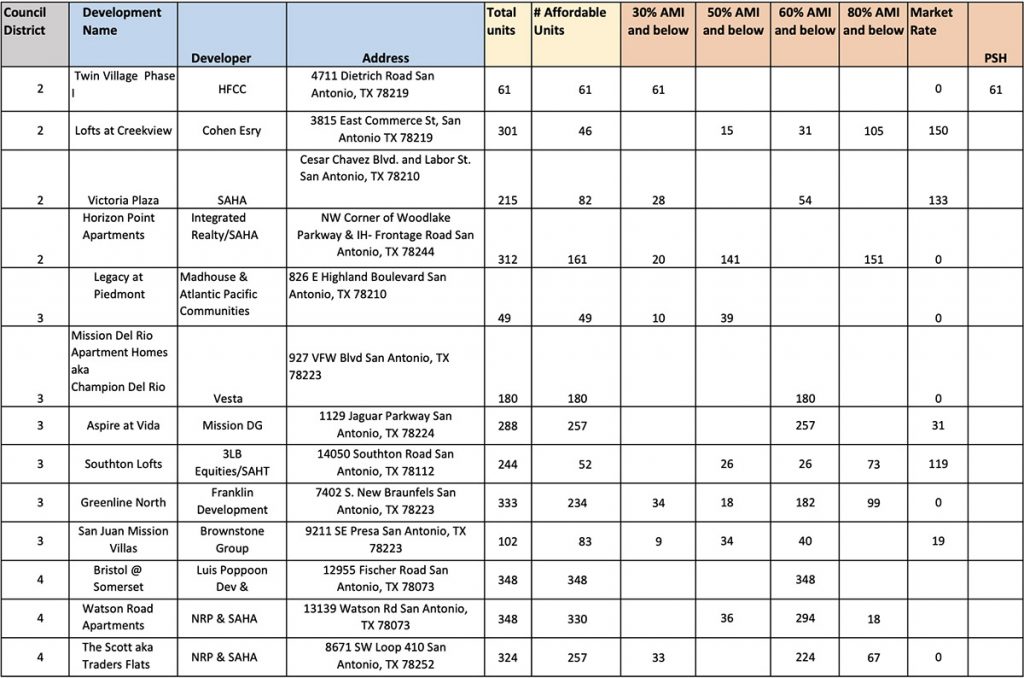 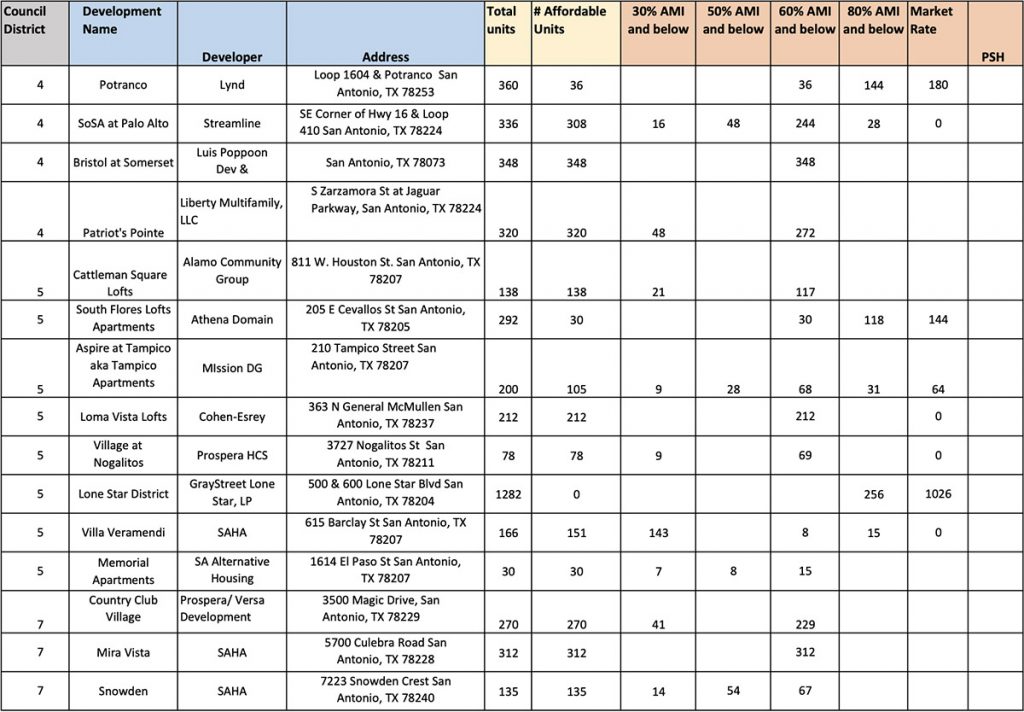 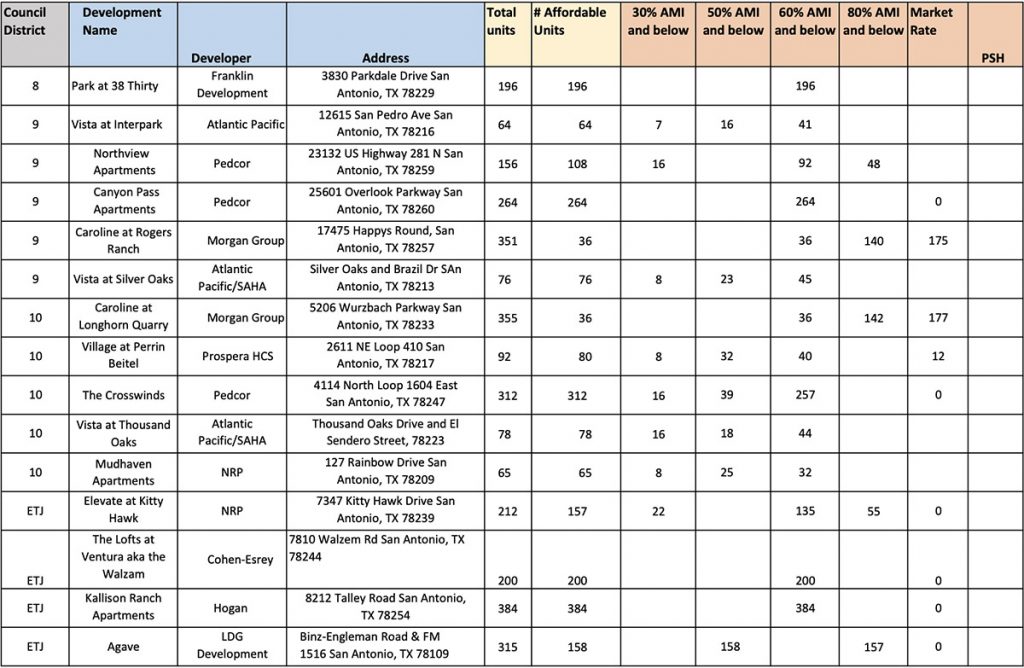