The San Antonio Heron’s Board of Directors has now expanded to include five additional members as of early this year. Since the nonprofit launched in 2018, the board has been composed of three board members, the latest iteration of which was co-founder and President Ben Olivo, Vice President Crystal Darby and Treasurer Roman Sandoval.

In March, the Heron’s expanded board met for the first time. The new board members are Glenda Wolin, a retired newspaper editor who currently volunteers as vice president of voter services for the League of Women Voters of the San Antonio Area; Kent Oliver, owner of The Dakota East Side Ice House; Lynn Knapik, an independent real estate broker; Mario Ochoa, co-owner Sammis|Ochoa, PR and marketing agency; and Laura Calderon, a communications professional at Ximenes & Associates.

They join Olivo, a former Express-News reporter and columnist; Darby, a business advisor at the University of Texas at San Antonio Small Business Development Center; and Sandoval, CEO and founder of Allosense, a San Antonio technology startup. 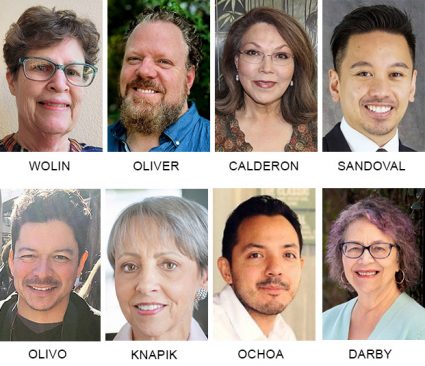 The eight-member board marks a milestone for the publication, Olivo said.

“Since we launched in 2018, the Heron has always had three-member boards,” Olivo said. “Filling out our board is a major milestone for the Heron. They have one primary job: to hold me accountable. Two months in, they’ve held up their end of the bargain.”

Olivo said that the expanded board has already made an impact on the organization’s capacity. As of this year, the Heron has migrated its donor records to a donor management system, and has streamlined the donation process.

“We’ve also started the transition into a more professional financial strategy,” he said. “Plus, later this year, we hope to unveil a new logo and redesign of our website. Each milestone reached gets us closer to being self financed.”

Wolin, one of the new at-large board members, said that the Heron’s focus on downtown development allows extensive coverage on lesser-explored topics.

“I think the two focuses of it, you know, downtown development and how it affects the neighborhoods around it are just really vital,” Wolin said. “They don’t always get the coverage they should. And not being distracted by other issues or trying to cover too many things really allows an opportunity to give people information about those two subjects.”

Wolin added that she believes the Heron’s digital contributions are important because “the (journalism) industry is in trouble.” Today, the Heron launches its annual Birthday Campaign, which continues through July 8, as it enters its fifth year of publishing.

“It has never been able to quite figure out how to deal with the Internet,” Wolin said. “Some of the websites for newspapers are really bad. Others pour everything into the website and still end up with, you know, just not good technology.”

Kent Oliver, owner of The Dakota East Side Ice House and an at-large board member, said that his interest in the organization stemmed from his appreciation of the Heron’s storytelling.

“I don’t feel like it’s influenced in any way by any specific group,” Oliver said. “I feel like it’s very open. It’s kind of like an open conversation, so it’s not swayed by anyone’s involvement.”

Oliver said that his experience as owner of the ice house has led him to understand the importance of additional help, which he thinks will benefit the publication.

“I feel like there’s gonna be a lot of things that I’ve had to go through with my own business,” he said. “Involvement from other people in the community really expands your understanding of what’s out there. And having this group of people from different walks of life, from different backgrounds, giving input into that, they’re gonna notice things that you don’t notice.”

Wolin said that she “urges” the public to give the Heron an opportunity as it continues to grow.

“They can read the newsletter for free and if they like what they see they can support it too—to have this force that’s presenting some material that they may not see otherwise,” Wolin said. “And for funders, foundations and businesses to see how this can be a real asset to them and their community.”

Read more about the board here.