Heritage Plaza, the 343-unit apartment building a block south of the Bexar County Courthouse, is near completion and already has five new downtowners living there, according to a leasing agent.

The $57 million market-rate project is enclosed by Dwyer Avenue, Old Guilbeau Street, South Main Avenue and Stumberg Street. It’s the second project in downtown San Antonio for Cypress Real Estate Advisors of Austin, which also completed the Rivera on Broadway in 2017 before recently selling it to The Barvin Group of Houston.

Heritage Plaza is significant because it’s one of the few incentive-backed housing developments located in the downtown core. The five- and six-story buildings have gone up inside East César E. Chávez Boulevard in south downtown, adjacent to Encore SoFlo, which was completed June 2019 by Encore Enterprises of Dallas.

The only public incentives the project is receiving is a city property tax rebate worth an estimated $4.3 million over 15 years, and about $150,000 in city fee waivers. The subsidies were approved a week before Mayor Ron Nirenberg suspended the incentive program in December 2017 because it was helping to produce mostly market-rate apartments, like Heritage Plaza. City Council has since changed the policy to encourage more below-market-rate housing units.

Currently, crews are still finishing out some of the units, and roughly 5,000 square feet of retail space that faces Stumberg has yet to be leased.

All that remains on the block is a 1910-built house at 315 Dwyer Ave. owned and occupied by George A. Scharmen and his law firm. Heritage Plaza has been erected around the two-story house a la Pixar/Disney’s 2009 movie “Up.” 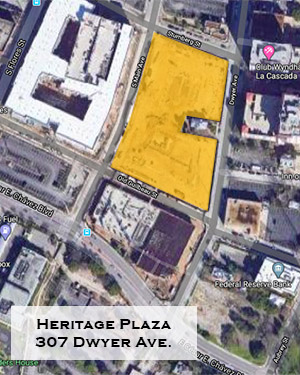 July 6, 2018
The Historic and Design Review Commission (HDRC) approves certain portions of the development to go up in height by a floor—from five to six. Read more.

May 17, 2017
HDRC grants Cypress Real Estate Advisors a certificate of appropriateness for its development. Read more.