The redevelopment of the long-vacant Friedrich Building complex on the East Side cleared another hurdle on Tuesday when it was awarded a $1.7 million grant from the Inner City Tax Increment Reinvestment Zone coffer.

Specifically, the Friedrich Lofts, 1617 E. Commerce St., will comprise 173 market-rate units, 160 units rented to households making 80 percent of the area median income (AMI), and 14 units for people making 60 percent AMI. In San Antonio, the AMI for a family of four is $63,500, according to the U.S. Department of Housing and Urban Development.

In order to build the lofts, most of the 14 structures on the Friedrich site will have to be demolished. The complex is a cluster of derelict structures built between 1923 and 1956 and is currently owned by a group headed by John Miller of Dallas. In recent years, Miller was successful in getting the historic label removed for most of the buildings so that Miller could then market them to potential developers, such as Provident, as a potential development site. 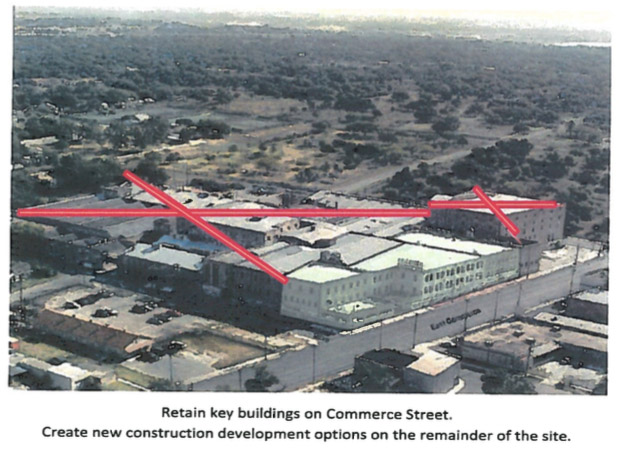 He was successful. Provident is now in position to build on four acres on the six-acre site.

Miller’s group owns the portion of the complex where the “Friedrich Refrigerators” sign sits. James McKnight, an attorney for the group, told the Heron that Miller could development remaining portion, which retained its historic label, or could sell to a potential developer.

The project by Provident includes a 725-space parking garage and resident amenities such as a 6,000-square-foot club house and residents lounge, a gym, computer lounge, pool and patio, and outdoor courtyard.

The development will not include any retail space.

The average unit size will be 885 square feet. Affordable units will average $1,050 per month, and market-rate units at $1,334 per month.

For this project, Provident also received an incentives package composed of $500,000 in SAWS fee waivers and $97,670 in city fee waivers.