On Tuesday, crews began demolishing three single-story commercial buildings on the 100 block of East Commerce Street for the 17-story Floodgate, a luxury apartment project by local developer Keller Henderson that will also face the River Walk.

The $43 million, octagonal tower will stand between the Witte building and Esquire Tavern, which are both owned by local developer Chris Hill. Hill and Merritt Development Group of Austin are also building the 22-story Canopy by Hilton on the end of the block at North St. Mary’s Street, across from the Aztec Theatre.

On Dec. 5, 2018, the Historic and Design Review Commission (HDRC) granted the Floodgate a certificate of appropriateness, which approved the design as well as the demolition of the row of commercial structures, which were local landmarks, that stood in its place. In recent years, notable tenants included restaurants Bella on the River and Jerry’s Chicago Style Hotdogs. The HDRC ordered the historic stone flood wall along the River Walk, the parts of the buildings that face the River Walk, be incorporated into the Floodgate’s design.

It’s unclear whether Henderson will deconstruct the wall stone by stone and reconstruct it later, which is the method Hill and Merritt Development are using for the former Mortgage Investment Corp./Sullivan Bank building and Alamo Fish Market facades at the Canopy site.

Henderson did not return an interview request for this update.

Scroll down for more info. 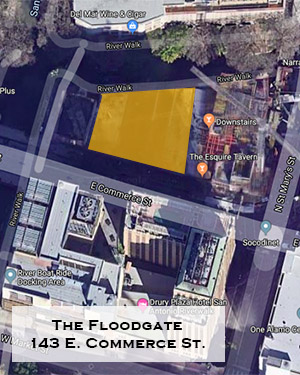 Three businesses that’s building the Floodgate are sued by neighboring Drury Plaza Hotel San Antonio Riverwalk, alleging a construction crane knocked over a 20-foot tree on the hotel’s property on Feb. 25. The tree then struck a plate glass window, the lawsuit alleges. Four days later, the hotel owner obtained a temporary restraining order against the Floodgate builders “to desist and refrain from any invasion of the airspace” of the hotel’s property, the San Antonio Express-News reported. Read more.

Dec. 5, 2018
Design for The Floodgate, a 17-story luxury apartment tower on East Commerce Street, received a certificate of appropriateness from the Historic and Design Review Commission. Its contemporary design and octagonal shape on one of downtown’s most prominent blocks makes the project stand out. The project, by Keller Henderson of San Antonio, will include 53 units and restaurant space on the River Walk and on Commerce. Read more.

2017
Word of the Floodgate, named for its location near the River Walk’s north floodgate, first appears in an article in the San Antonio Express-News. In the piece, Henderson says rents would average $4 per square foot, which would make it the most expensive apartment property in San Antonio. Read more.