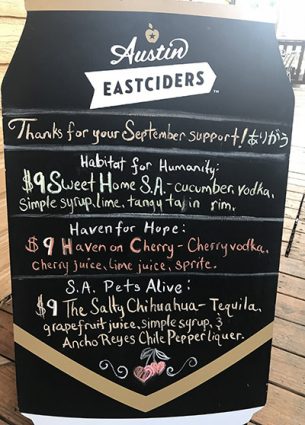 The East Side bar, located next to the Alamodome, opened in April as a new concept for the San Antonio happy hour and nightlife seen: philanthropy through tippling. The brainchild of owner David Malley, Cherrity Bar donates all proceeds to three San Antonio nonprofits that rotate every month. When people purchase a beverage, or spend $10 or more at the Ramen Bar, they’re given a token and can then use to vote for one of the three nonprofits. The organization with the most votes receive 60 percent of the proceeds, but the other nonprofits get a slice of the profits, as well. This month the charities are Habitat for Humanity, Haven for Hope and San Antonio Pets Alive!

For owners David and Pam Malley, who own a commercial property maintenance company, the bar is six years in the making.

Cherrity Bar was partially inspired by Malley’s son, Connor, who has Tourette syndrome. Ten percent of the proceeds also benefit the Tourette Association of America, in honor of Connor. While Malley had already been working on opening the bar, the idea for the charity model came later in the process after learning about three others like it in the U.S. such as the OKRA Charity Saloon in Houston. With the support of his wife, he went for it.

Nonprofits interested in the opportunity to win proceeds from Cherrity Bar can apply online at cherritybar.com. Monthly reports that show how the profits are dispersed will soon be available on the website, Malley said.

“Any nonprofit can get their word out,” he said.