Last year, the Bexar Appraisal District received a record 141,000 protests against its valuations of properties in Bexar County. With the average home appraisal surging by 23.2 percent this year, the district is expecting to handle even more protests, said Rogelio Sandoval, the assistant chief appraiser.

“Just what the market’s been doing this last year has been something that nobody had foreseen coming,” Sandoval said. “That alone is going to be increasing protest numbers throughout the state.”

The appraisal process is confusing, and often even frightening, to local homeowners who worry about how they’re going to pay their tax bills, so the Heron is providing a step-by-step explanation of how it works, with input from Sandoval and Michael Amezquita, the chief appraiser.

“The advice I would give homeowners is, let’s just have a discussion,” Sandoval said. “Let my staff explain to you, first of all, how we arrived at your valuation… Once we’ve established how we arrived at your market value, then you say, ‘Now let’s talk about my house. Let me show you what’s wrong with my house. And if I were to put it on the market, I don’t think I would get what you guys are appraising it at’.”

Here are the steps in the process:

The protest deadline is typically May 15, but because that date falls on a Sunday this year, the appraisal district is extending it to May 16.

Property owners can file a protest through the mail or by putting it in a dropbox, at the addresses listed on the district’s website. Or they can file it via the district’s online portal, which they can also use to submit evidence to support their case that their property should have been valued lower than it was.

The online portal can be more convenient for property owners with a straightforward case, Sandoval said.

“We encourage people, if you want to have a conversation with an appraiser, then just file your protest. We’ll send you a letter with the QR code, then you can have that discussion with the appraiser,” he said. “But if it’s something pretty simple, where a property owner just recently purchased a property, they recently got it refinanced, they have that documentation, they can use the online portal to file their protest and submit the evidence. An appraiser will review the evidence and then send them an email back with any kind of offer.”

Sandoval advises property owners to check a red box on the protest form requesting the evidence that the appraisal district used in valuing their property. The district will then send them an “equity report” showing the homes that their home was compared to in order to estimate its value.

Sandoval doesn’t recommend paying for an attorney or company to protest the appraisal.

“I always tell property owners, give us an opportunity to go through the process one time and see if you can come to a resolution with my staff instead of paying somebody to do something that is available for free,” he said. 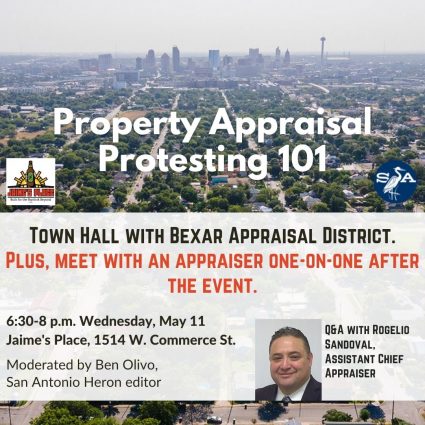 Join the San Antonio Heron and Jaime’s Place for a town hall with Rogelio Sandoval, assistant chief appraiser at the Bexar Appraisal District. After the town hall, attendees can meet one-on-one with an appraiser to help get their questions answered on their individual accounts.
…

After a property owner files a protest, he or she will receive a letter from the appraisal district indicating how to schedule an informal hearing. The letter will include a QR code that can be scanned to schedule the meeting.

Since the outbreak of the Covid-19 pandemic, the district has held those meetings over the phone or virtually, which is more convenient for property owners because it allows them to set a time at their convenience, Sandoval said. Before, they were given a choice of two different dates and times.

“They’d have to work around us. Now… the homeowner has the convenience of telling us what day, what time they want us to call them,” he said. “So if a property owner knows that they’re going to be busy the whole month of June, either on vacation or work, then they can schedule their informal in July or any other day.”

This “appointy system” has allowed the appraisal district to hold hearings with between 10,000 and 12,000 more people than it had been able to in the past because there had been more no-shows, he said.

“I’m very happy to say that for the last two years, through this system, we’ve had a 94 percent settlement rate with informal property owners,” he said.

What kind of evidence should property owners present to make their case that their appraisal value should be lowered?

“I always tell people, whatever you feel would make a case to have your value adjusted,” Sandoval said. “Because one of the things that we remind property owners is, I don’t look at your property. When we value your property, we look at your neighborhood, so we do mass appraisal. We have over half a million residential homes, so we don’t have the resources to value individual homes.”

“Once the property owner protests and submits his evidence, we can get down to the specific characteristics of that individual property,” he said.

Here are some types of evidence that can be submitted:

» Photographs showing problems with the property, such as foundation or plumbing issues.

» Repair estimates for damage on the property.

» A comparative market analysis, or CMA, from a realtor. Under state law, the appraisal district doesn’t have access to sales prices for properties that have changed hands over the last year. Realtors typically have access to that information through the multiple listing service, or MLS, which might show that a property should have been valued lower based on how much similar properties sold for nearby.

» A property owner can use the “equity report” to make an argument that her home was valued unfairly. For example, she could point out that homes of a similar size to her own were valued lower than hers, or that her home was compared with homes that have pools, when she doesn’t have a pool.

» Sales information for the property. For example, if a homeowner bought the home the prior year for less than it was valued for, that could be presented as evidence that the valuation should be lowered.

“One of the things that I tell people is that they know their property better than we do,” Sandoval said. “You can look at those specific addresses and say, ‘Wait a minute, why are these two guys valued so much less, when all things being equal, we should be fairly comparable in the same square footage, the same size lot?’”

A property owner typically has between 15 and 20 minutes to talk with an appraiser about their protest. After looking at the evidence, if the appraiser decides that the value should be lowered she will make an offer at the end of the meeting.

The property owner can then choose between accepting the offer or protesting it to the Appraisal Review Board, or ARB, a 45-member body that is a separate entity from the district.

5) If you don’t accept the district’s offer, protest it to the Appraisal Review Board.

Like with the informal hearing, the property owner will meet with the ARB by telephone or virtually, though an in-person meeting can be requested.

The owner and the appraisal district will then each present arguments before the ARB regarding the home’s valuation. Sandoval emphasized that the district will not seek a value higher than what was offered at the informal hearing.

“One thing that I’d like to remind your readers is that if I make an offer to you informally, whatever that offer is, that’s going to be our starting point at the formal level, if they want to go further,” he said. “So if I sent you a value notice of $250,000, and I made an offer of $215,000, informally, if you think that you want to still try to get that lower at the ARB, our appraiser… is not going to go higher than that $215,000.”

6) If you don’t accept the ARB’s decision, protest it through binding arbitration or District Court.

After the ARB makes its decision, the property owner has 60 days to decide whether to continue the protest through binding arbitration or through District Court, Sandoval said.

“The bottom line is, there’s very few homeowners who have the wherewithal, or a big enough problem to take the matter to court, because that’s going to require an attorney,” said Mike Amezquita, the district’s chief appraiser. “As far as the binding arbitration goes, you know, it’s kind of a loser-pay scenario.”

If the property owner chooses the binding arbitration route, the Texas Comptroller’s Office will assign an arbiter. The owner will typically be charged a $500 filing fee, Amezquita said. They can recoup most of that if the case is decided in their favor.

“Once that arbiter makes a decision, that is binding,” he said. “Literally the law says, whoever’s value the arbiter rules in favor of to the closest dollar amount, whether it’s the plaintiff’s value, or the appraisal district’s value, which would be the value that was set by the ARB at the end of that hearing, prevails.”

The property owner has the choice, then, to appeal the District Court’s decision, all the way to the Texas Supreme Court—but that’s rare for residential properties.

My City Is My Home, a local nonprofit that provides housing education to low-income families, has offered to protest appraisals for households who make less than $36,000 a year, and whose homes are valued at less than $185,000. View their property appraisal guide for more tips.

Richard Webner is a freelance journalist covering Austin and San Antonio, and a former San Antonio Express-News business reporter. Follow him at @RWebner on Twitter