One of the first developments in the downtown area planned without the use of government subsidies could be close to breaking ground in the Lone Star District in Southtown.

A 310-unit, four-story apartment building by Austin developer OHT Partners, at 400 Probandt St., was granted a certificate of appropriateness by the Historic and Design Review Commission (HDRC) on May 4. OHT Partners, and another Austin company, have owned the 4.2-acre site for three years while allowing a recycling company to continue operating there until the partnership was ready to break ground on the apartments.

The project, which would sit across a Southern Pacific rail line from The Flats at Big Tex—which itself rests on the Mission Reach stretch of the San Antonio River—will be composed of all market-rate apartments wrapped around a five-story, 442-space parking garage.

“We view this development as key to revitalizing the Probandt corridor and catalyzing future development on the corridor,” Jackson Simons, OHT Partners’ vice president of development, told the HDRC on Nov. 17, 2021, when the company was seeking conceptual approval.

In a letter submitted to the HDRC, OHT Partners had it clear it’s not seeking incentives of any kind for the project, the cost of which was not disclosed. “The full cost of the project will be shouldered by the developer,” the letter reads.

Currently, Federal International Recycling and Waste Solutions occupies the site, which has been leasing the site for a few years. “This lease won’t expire until we break ground on this project,” Simons said in November. OHT Partners and Cabot Chase, Ltd., another Austin entity, purchased the property in 2018 from JoNa Real Estate LLC of Dallas, which purchased the property in 2016 from BFI Waste Systems of North America.

The property was valued at $5.4 million this year by the Bexar Appraisal District.

In a 2018 letter to the city’s Office of Historic Preservation (OHP), Pape-Dawson Engineers said there was “the potential for the San Pedro Acequia to be present in the project area.”

“If the acequia is present, work in the immediate vicinity would temporarily stop while Pape-Dawson notifies (the OHP) and documents the acequia,” the letter reads. It’s unclear what would happen at that point.

The Probandt Apartments, as the project is referred to in HDRC documents, would include 8,000 square feet of interior amenity space, two outdoor courtyards, and a resort-style pool.

“The project architecture was designed to complement and preserve the historical character of the City of San Antonio and adjacent King William neighborhood,” OHT Partners said in the letter.

Since San Antonio let its Center City Housing Incentive Policy expire at the end of 2020, a handful of developments not seeking public incentives, or subsidies, have been announced. Most notably, Sabot Development of Austin is planning to build a 10-story, 299-unit market-rate building across the river from the Pearl.

OHT Partners’ development is located in the fast-changing Lone Star District, where prominent San Antonio developers such as David Adelman has purchased adjacent property, and James Lifshutz has purchased in the vicinity. Of course, the Lone Star Brewery site, which has seen numerous failed revitalization attempts—the latest by local GrayStreet Partners and Houston’s Midway—is right around the corner.

OHT Partners and Cabot-Chase Ltd., both from Austin, purchase the property at 400 Probandt St. from JoNa Real Estate LLC of Dallas.

In a letter to Kay Hindes, city archeologist in the Office of Historic Preservation, Nesta Anderson, an archeology program manager with Pape-Dawson Engineers, writes about the potential for the San Pedro Acequia to be located on the site.

“At the time the concrete is removed from the site, our archeologists will excavate backhoe trenches or monitor excavations on site to investigate whether the acequia may be present within the project area,” Anderson writes. 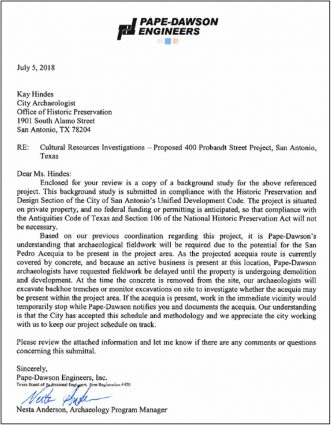 The HDRC delays granting OHT Partners a certificate of appropriateness over a disagreement with the city’s Unified Development Code, which states that windows within solid walls should be recessed by two inches for large multifamily developments. OHT Partners insisted windows set within board and batten siding sections of the project should be flush with the siding; recessing those windows would allow for the potential for water intrusion in years to come, the developer said.

Without discussion, the HDRC unanimously approves granting OHT Partners a certificate of appropriateness. According to the agenda, OHT Partners agreed to recess the windows set within the board and batten siding by two inches.