The new owners of the circa-1929 Tower Life Building want to convert the long-time office building at 310 S. St. Mary’s St. into apartments, and they will soon start negotiating with Bexar County on forming a partnership.

Citing a decline in downtown office demand, the ownership group, which includes developer Ed Cross and Jon Wiegand of investment firm Alamo Capital Advisors, wants to convert the 30-floor office tower into roughly 234 apartments with 10,000 square feet of restaurant space each on the ground and river levels.

“All of us really, really want to preserve our historic buildings and make good use of them,” Judge Nelson Wolff on Tuesday morning told the commissioners court, which voted unanimously to begin the negotiation process with the Tower Life ownership group, known as SA Tower Life, LP.

For its part, the county, through its nonprofit entity Bexar County Public Facility Corp. (PFC), would provide a full property tax exemption as long as half the units are priced for people making up to 80 percent of the area median income (AMI), according to state law.

Typically, PFC partnerships in Texas are formed for the construction of apartments; and the PFC must actually own the property in order for the property tax exemption to kick in. The PFC then forms a partnership with a developer, and that partnership leases the property from the PFC, typically for 75 years.

The exact rent levels are yet to be determined, Cross and county officials told the commissioners court. David Marquez, the county’s executive director of economic and community development, said they’d use the Continental Hotel project as a baseline for negotiations in determining the Tower Life’s rent levels. In the Continental Hotel project, in which the Bexar County PFC has partnered with Weston Urban, half of the 255 units will be market-rate priced, 40 percent reserved for households making up to 80 percent AMI, and 10 percent for those making up to 60 percent AMI.

Marquez expects negotiations between the county PFC and the Tower Life ownership to take 60-90 days to complete.

During the meeting, Commissioner Tommy Calvert recognized how the optics of a private developer seeking a full property tax exemption may not sit well with many San Antonio taxpayers. “With the foregoing of tax revenue there has to be a public benefit,” Calvert said. “Anytime the county gives incentives, it’s based upon job creation, it’s based upon the public benefit, based upon (a public) return of some sort.” So, Calvert asked Cross and Wiegand what the public benefit would be for this partnership.

“Affordability, for one,” Cross told Calvert. “There’s a population who can’t work remotely. They work in restaurants, hotels and the convention center, and they have to show up. And so by living downtown, they get to use the existing infrastructure that this county and this city has already built—the streets and sewer—and doesn’t have to be newly-built out in the suburbs.”

It’s worth noting that the City of San Antonio no longer considers apartments priced for households making up to 80 percent AMI as affordable, since it adopted its Strategic Housing Implementation Plan last December.

San Antonio’s own PFC, known as the San Antonio Housing Trust PFC, has built more than 10,000 units since it first co-developed the Cevallos Lofts in Southtown in 2010. By comparison, the Tower Life partnership would be the county’s second PFC partnership, the Continental Hotel redevelopment being the first.

San Antonio’s PFC has moved away from the type of partnership the county is considering with the Tower Life Building owners. That evolution in philosophy, toward the backing of lower AMI units, is the result of years of pushback from housing advocates, who criticized the city’s PFC for producing what it considered to be too-high a percentage of 80 percent AMI and market-rate units—roughly 40 percent—over the years.

In San Antonio, many housing observers consider 80 percent AMI, which is $66,300 for a family of four, to be inflated compared to this city’s true median income because it also include cities like New Braunfels. The Census Bureau’s American Community Survey 5-year estimates put San Antonio’s median income at $52,455, but it does not account for household size.

At Tuesday’s Commissioners Court meeting, there were already questions about whether this potential partnership would yield truly affordable units.

“You don’t buy a building like this without running some numbers,” Calvert told Cross and Wiegand. “When this building was purchased, what are the numbers that were put together about the rent range that would be available to make this a profitable venture?”

Cross said the ownership group has not nailed down unit types, but said they’re seeking a diversity of apartment sizes and rents.

“This is exactly the kind of guidance we hope you will provide to us as we move along this negotiation process,” Cross told the commissioners. “What’s the mix of units we think we should do and then we’ll give you prices. Impossible to do right now.”

Commissioner Justin Rodriguez noted that the Bexar County PFC was formed with historic preservation as one of its main objectives. The re-population of downtown has also been a priority for the city and, to a degree, the county, for more than a decade.

For Cross and Wiegand, the project resuscitates a building that’s not being used to its fullest. The Tower Life’s 248,279 square feet of rentable office space stands at 40 percent occupancy.

“The building has struggled to maintain even break-even occupancy for several decades and the once proud retail space that connected and created energy with the street plain has been not only vacant but in shell condition for over 20 years,” Wiegand said.

“Now, unfortunately the office problems at the Tower Life far predate the problems created by Covid, but Covid has been a detriment to urban centers all around our country.” 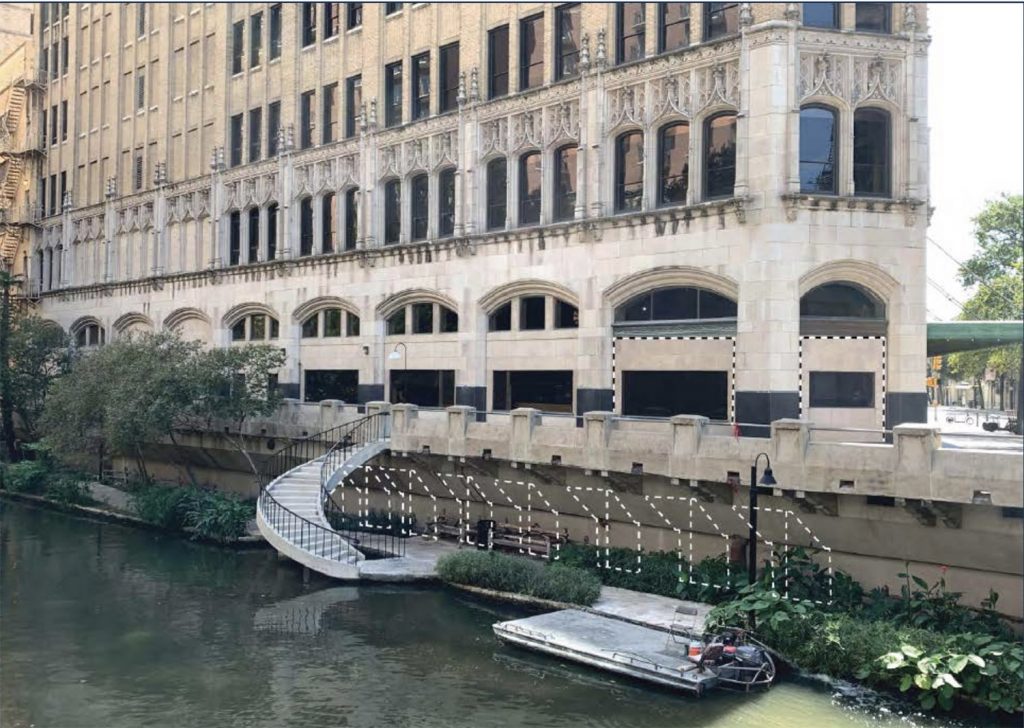 In an interview after the meeting, Marquez said that while the country hasn’t set its own AMI goals for its PFC deals, housing is needed at all affordability levels in order to help fill San Antonio’s housing shortage, which was exasperated by the pandemic—a point Mayor Ron Nirenberg has also made in recent weeks.

“We are not pitting one aspect of affordability against the other, we need all of it,” Marquez said. “There’s a demand for 80 percent AMI. We don’t have a strong opinion or at least a policy as far as what constitutes affordable, what constitutes workforce.”

For the Tower Life redevelopment, Cross and Wiegand said future residents could use 145 spaces in the adjacent garage, as well as other spaces and garages nearby.

On May 2, Cross, Wiegand, and McCombs Enterprises purchased the historic Tower Life from the Zachry family, which had owned the building for nearly 80 years.

The Tower Life Building was part of a building boom in the 1920s, and debuted in downtown San Antonio on June 1, 1929, fourth months before the start of the Great Depression. When it debuted, Sears Roebuck Department Store occupied the building’s first six floors, while floors 7-30 were filled with office tenants. The Tower Life, designed by Atlee B. and Robert M. Ayers, the prominent San Antonio father-and-son architecture team, has also been known as the Transit Tower and originally as the Smith-Young Tower.

Heron Editor Ben Olivo has been writing about downtown San Antonio since 2008, first for mySA.com, then for the San Antonio Express-News. He co-founded the Heron in 2018, and can be reached at 210-421-3932 | ben@saheron.com | @rbolivo on Twitter
Contact the Heron at hello@saheron.com | @sanantonioheron on Twitter | Facebook | Instagram