Last year, as the massive 283-unit apartment project on the southwest corner of Broadway and Jones Avenue pursued pre-construction approvals, it was a development without a name. That changed recently.

Cleveland-based developer NRP Group and the San Antonio Housing Trust Public Facility Corp. (PFC) recently broke ground on The Flats at River North, a $55.9 million, five-story development located at 1011 Broadway. Fencing advertising the new name surrounds the 2.7-acre property that’s a quarter-block from the Museum Reach on one end, and across from Maverick Park, on the other side of Broadway, on another.

Through an agreement between NRP Group, which has built more than 8,000 apartment units in San Antonio since 2003, and the city-created nonprofit San Antonio Housing Trust PFC, The Flats at River North will provide a range of rents according to income. Half will be priced at market-rate. Ten percent of the unit total will be reserved for people making between 50 and 60 percent of the area median income (AMI), or between $33,400 and $40,800, respectively, according to the current figures from the U.S. Department of Housing and Urban Development. The rest will be priced for households making 80 percent AMI.

“We are very pleased to work with the stakeholders and partners in The Flats at River North to help bring much needed workforce housing to San Antonio,” NRP Group said through the firm.

In the Flats deal, a tenant would be charged 30 percent of their income, a rent restriction that’s intended to make the units truly affordable. However, NRP Group—which is the developer, the builder and the management company for The Flats—can charge up to 35 percent of a tenant’s income at any time.

The project is scheduled for completion in spring 2021, and the first move-ins are expected in late 2020.

The development will also add about 15,000 square feet of retail, most likely restaurants, on two floors.

The project is due to receive a grant worth $680,000 from the Midtown Tax Increment Reinvestment Zone (TIRZ), a city-designated area that generates revenue from the rise in property taxes. The revenue is reinvested into projects within the zone.

The Center City Housing Incentive Policy is also contributing $1.5 million, a combination of city and SAWS fee waivers and a mixed-use loan. 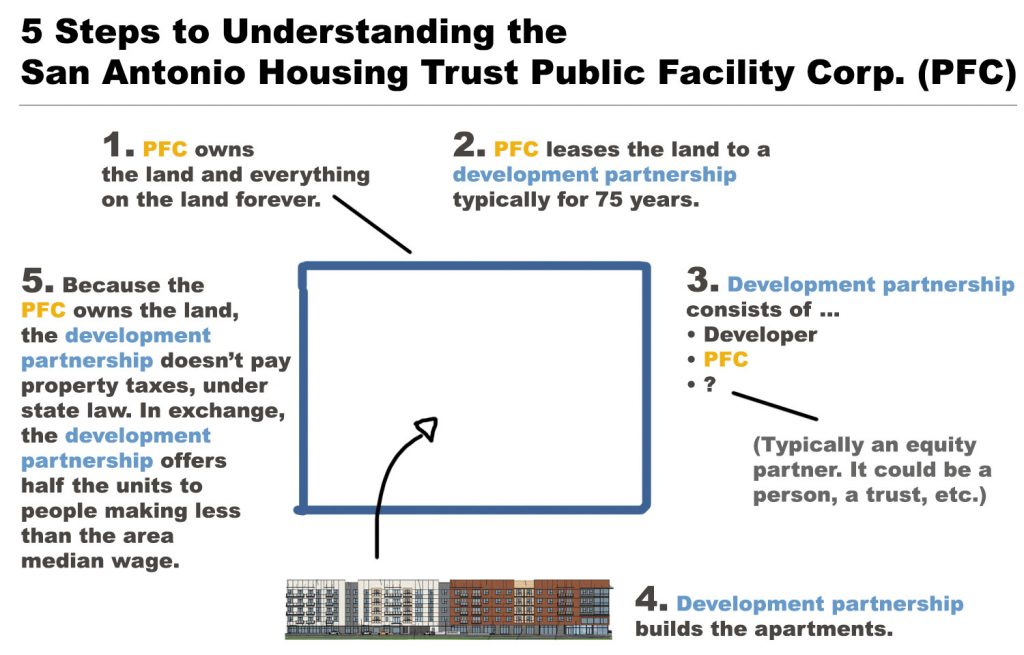 For more background on The Flats at River North, and PFCs, read:

» How The ’68 at Hemisfair will offer true affordability to some