The redevelopment of the 81-year-old Alazan Courts, the collection of deteriorating barracks-style apartments on the near West Side, is back on track after a change in leadership at the San Antonio Housing Authority (SAHA) in January put the massive undertaking on pause for much of the year.

Meanwhile, SAHA has requested that the Alazan Courts be included among the dozens of projects to receive funding from the $1.2 billion 2022-2027 bond program, which San Antonio voters, including those in north side districts where turnout is much greater than in inner city districts, will be asked to approve in May.

The Alazan Courts is one of the last large-scale public housing communities left in San Antonio. Over the decades, the complex of brick and cinder block apartments just west of downtown have fallen into disrepair, leaving many of its 1,200 low-income residents, whose average income is $8,700, living in substandard housing.

Specifically, SAHA’s request is $75 million for Alazan from the estimated $250 million housing portion of the $1.2 billion bond program. Other parts of the bond will fund flood control initiatives, the repairing of streets and sidewalks, the building of new parks and libraries, and other major capital upgrades across the city. To put the figures in context, the last bond program, approved by voters in 2017, totaled $850 million and included a significantly smaller portion for housing: $20 million.

» What: 2022-2027 bond program
» How much: Estimated at $1.2 billion
» What projects? To fund major citywide upgrades in these categories: 1) streets, bridges, sidewalks; 2) drainage and flood control; 3) parks, recreation, open spaces; 4) municipal facilities; 5) public safety facilities; 6) housing
» When: Public vote May 2022. Public meetings to decide projects begin in late October.
» What is a bond? A general obligation bond is debt a municipality takes on. In this case, the City of San Antonio is looking to borrow $1.2 billion collectively from several banks. The collateral on the debt is city taxes, which is why it requires voter approval.
» Scroll to the bottom for more info.

This year, SAHA has been adamant about its intent to keep 501 public housing units on the site, if not add to the total—as opposed to a previous version of the plan that would have reduced public housing at Alazan in exchange for mixed-income apartments. The housing authority has also insisted the redevelopment be done in phases—1) build new housing; 2) move residents into new housing; 3) demolish or rehab old housing—so that Alazan residents can remain living on site as the project is completed over several years.

SAHA officials don’t yet know if the Alazan Courts will be demolished and rebuilt, or if the existing structures will be refurbished. Those questions will be answered during the master planning process, which is scheduled to begin later this month and lead by South Texas architecture firm Able City, said SAHA President and CEO Ed Hinojosa Jr.

In a letter to City Manager Erik Walsh, dated Aug. 23, Hinojosa Jr. said the Alazan Courts project could exceed $300 million, to be funded from a variety of sources.

Hinojosa Jr. said the upcoming bond, whether San Antonio voters approve or reject it, will not dictate the future of the Alazan Courts.

“We really would like to get some of the bond funding, but (the Alazan Courts redevelopment) doesn’t not hinge on that,” Hinojosa Jr. said in an interview with the Heron. “We’re going to find a way to make this work.”

The process to decide the specific bond projects begins later this month with a series of community meetings that continue through December. Bond committees, composed of community members appointed by Mayor Ron Nirenberg and City Council members, will work from a list of potential projects that have been submitted by various entities—both public (such as the city itself, and SAHA) and private—vying for bond dollars. (Scroll down for a list of potential projects and who’s requesting them.)

Ultimately, the City Council will approve the final list of bond projects in January or February, and call for the public vote in May.

At $250 million, the city is making housing a significant portion of the bond, which it hopes will help fill the housing gap in San Antonio. The city estimates there are 96,000 “cost burdened” households in San Antonio, and is putting the finishing touches on a complex strategy to fill the need, which includes constructing new below-market housing, preserving existing below-market housing, and investing in job training programs to raise wages to meet current housing costs.

Other metrics demonstrate a shortage of housing affordable to low-income residents.

SAHA says 35,000 people are on its public housing waiting list, and another 5,000 are waiting for Section 8 housing vouchers, a program that was reopened in September after being on hold for several years.

Up until Hinojosa Jr. took the helm at SAHA in January on an interim basis, the agency and housing justice advocates had spared for years over how best to redevelop the Alazan Courts. This time around, the process is much less antagonistic—if at all—and has some housing advocates, among SAHA’s harshest critics, optimistic their feedback will be heard.

“Our excitement is that Ed is definitely a different director than his predecessor … and the fact that he invited several of us to those conversations, that gives us hope, but I always have concerns,” said Graciela Sanchez, director of the Esperanza Peace & Justice Center.

Hinojosa Jr.’s predecessor was David Nisivoccia, who left in January to become the chief executive at Denver’s housing agency. Under Nisivoccia’s administration, SAHA had adopted an urban renewal strategy introduced by President Clinton and later adopted by President Obama that called for the de-concentration of public housing in exchange for mixed-income apartments. Those who would be forced to move, because the number of public housing units would be reduced, would be given housing vouchers. But critics of the strategy said those residents would be left without the safety net provided by public housing, which is managed by the housing authority; and that having a voucher doesn’t guarantee a tenant will find a landlord to accept the voucher.

Housing justice advocates, such as Sanchez, wanted the Alazan Courts to be preserved and refurbished.

The fight came to a head last November when advocates protested outside Nisivoccia’s home at the Steel House Lofts a few blocks south of the SAHA headquarters on South Flores Street.

When Hinojosa Jr. took over at the beginning of the year, the friction was eased considerably when he said the 501 public housing unit total at Alazan should be maintained in any iteration of redevelopment.

[ Related: New plan for Alazan Courts: SAHA intends to keep all residents on site after ‘self-developing’ the property | Jan. 21, 2021 ]

Since then, Hinojosa Jr. was confirmed by SAHA’s board in July as the official president and CEO, and last month invited the members of the Esperanza, the Westside Preservation Alliance, and other community groups to meet with and provide feedback on the two firms who were finalists for the master plan—Able City and Saldaña & Associates.

Last week, SAHA’s board selected Able City, which was also the top choice for many of the neighborhood activists.

“As you know, Alazan needs some investment,” Hinojosa Jr. said. “We’re excited about the approach we’re taking, which is to engage the residents and community in the decision. From my perspective, that’s the way it should happen.”

Sanchez’s concern is that even during the master planning process, that their feedback and ideas may not be incorporated into the new Alazan community, based on previous SAHA projects in the area, such as the 88-unit Alazan Lofts. Topping their list is the preservation of Alazan’s older structures. But not all agree, including some current residents at Alazan Courts.

Hinojosa Jr. said there is no pre-conceived plan for how to redevelop the Alazan Courts. He even backtracked from a previous stance he took that the courts, because they were so aged, must be demolished and rebuilt.

“As we listen to the community over the last few months, it’s pretty clear some people want to refurbish and upgrade units, but there are other people in the community, and even residents, who want to demolish and rebuild,” Hinojosa Jr. said. “So the architect’s responsibility is to bring those conversations together and to figure out the best way to proceed.”

Funding will play a role in the options. SAHA has thrown out a few figures—one, a more fast-tracked figure, estimates the project at $145 million, another puts it at more than $300 million.

SAHA is considering selling vacant land it owns to help pay for the overall cost to rebuild or refurbish the Alazan Courts. It’s also identified internal funding, and potential funding coming from President Biden’s infrastructure package. It also has the option to borrow money, and pursue low-income housing tax credits.

Here's how the last City of San Antonio voter-approved bond package compares to the one upcoming in May, from what we know so far.
… 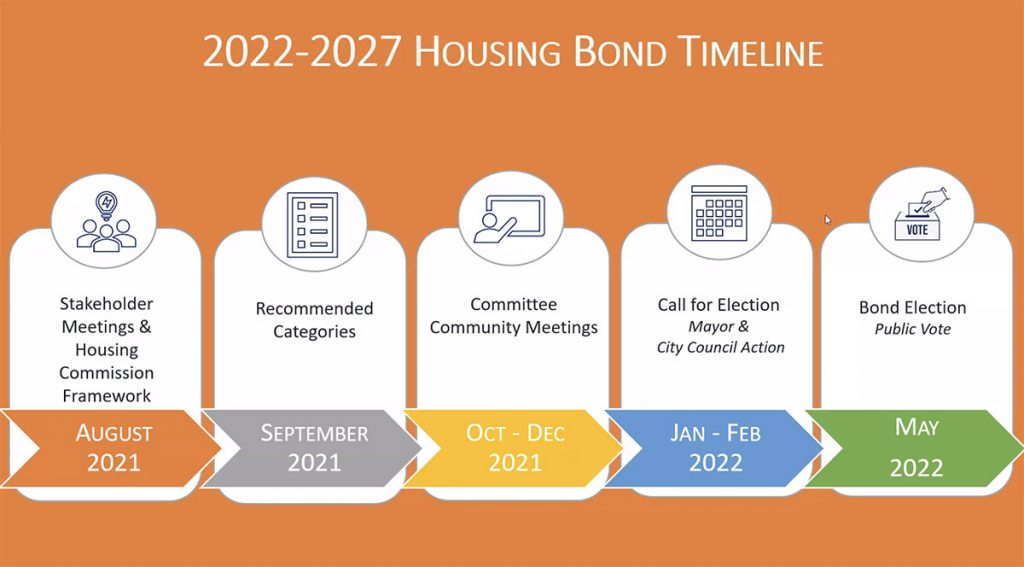