The renovation plans for the circa-1949 Alameda Theater, which has been closed since the 1980s, received final approval Wednesday from the Historic and Design Review Commission.

Construction work is scheduled to begin in the first quarter of 2020, and end in May 2021.

The theater, which is located on West Houston Street, next to San Pedro Creek, is being converted from a movie theater back into a performing arts space. During the Alameda’s early years as one of the nation’s premier Mexican-American performing arts venues, legends such as Pedro Infante, Cantinflas, and Rosita Fernandez graced the stage.

Much of the project is upgrading what’s already there. Repairs to the neon marquee. Rehabbing existing lounges and restrooms. Restoring and returning the aluminum twin dancer statue to the main lobby.

“If something is broken, we will fix it. But if it’s good, if it’s solid, and there’s no safety problems … we’re going to leave it there as a testament to the history of building,” Gary Martinez, a partner at D.C.-based OTJ Architects, which is leading the project, told the Heron in April.

Some parts of the theater will look different. The number of seats will be reduced to about 1,000; the theater opened with 2,400. Much of the upper balcony will be converted into a standing lounge area. And the stage will protrude into the crowd. 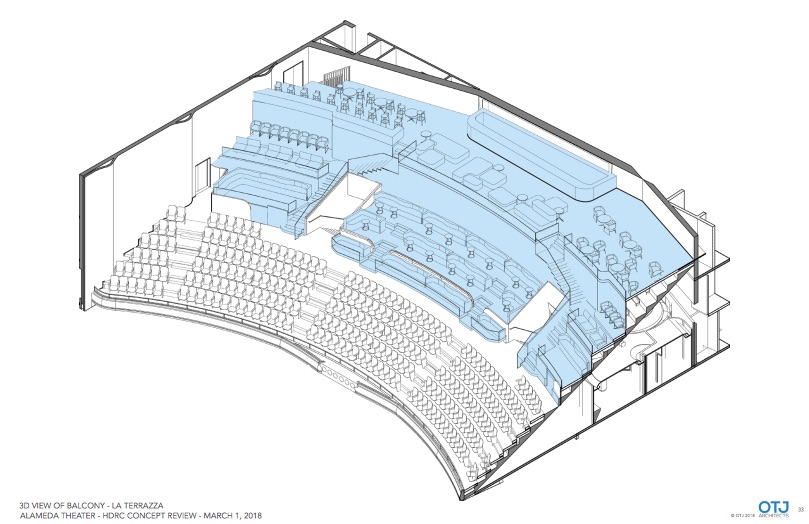 The painstaking process of reopening the Alameda Theater, which is estimated to cost around $20 million, is being lead by a nonprofit called the Alameda Theater Conservancy, which leases the theater from the city. The city and Bexar County are contributing a combined $10 million. Texas Public Radio (TPR), whose headquarters is being built in the Alameda’s conjoined annex building, is contributing another $5 million.

While people are excited about the Alameda’s comeback, some have expressed concern about the plan. At a public meeting in April, some artists and activists criticized the theater’s smaller size in terms of seating, concluding that a reduction of seats would mean higher ticket prices. Others worried the theater might be inaccessible to smaller arts groups wanting to use the space.

Addressing ticket prices, Houston said a business model had not yet been crafted.

The Alameda is one of several projects happening simultaneously in the west downtown area.

Construction of TPR’s headquarters, which will include a blackbox theater, continues on the backend of the Alameda complex. Along the Alameda, workers continue to shape the next segment of the San Pedro Creek Culture Park, a $75 million endeavor that will include an outdoor theater across the creek from the Alameda. It’s scheduled for completion in early 2021.

These projects touch the Alameda. Other projects sure to reshape west downtown are the expansion of the University of Texas at San Antonio, Weston Urban’s continued development in the area, and the reconstruction of West Commerce Street.

Designed by Texas architect N. Straus Nayfach, the Alameda Theater was built in what used to be known as San Antonio’s West Side, before Urban Renewal erased most of the neighborhood around it.