Next May, for the first time, San Antonio voters will be asked to approve a housing bond of significant size: $250 million to go toward the construction and preservation of new apartments and single-family homes, as well as the acquisition of property for future below-market housing, also known as land banking.

The housing bond is part of the $1.2 billion 2022-2027 bond package, which will be filled with several dozen large-scale projects across the city—from repairing streets and sidewalks, to building new libraries and parks, to improving drainage issues.

By comparison, in 2017, San Antonians approved an $850 million bond package composed of more than 180 projects. Next year, for the first time, housing will be a major component.

Housing in San Antonio is about to get more complicated. Some of the themes in this article we will expand on later. The purpose of this piece is to bring you up to speed on the housing bond process, which voters made possible when they approved Proposition A last May.

The process of deciding which projects to invest in for the 2022-2027 bond program has begun to a degree. Right now, city executives and staffers are making lists of projects to recommend to committees, yet to be named, composed of community members who will deliberate over the lists from October to December. The recommendations will be presented to the City Council at a B session meeting on Sept. 29, officials said.

As far as housing goes, the $250 million amount is pulled straight from the Housing Policy Framework, the 2018 report by the Mayor’s Housing Policy Task Force. It’s a working number, city officials say. It could change as the housing bond traverses the committee process beginning next month. Those committees, partially appointed by council members, will deliberate over the list of projects, tweak the list, perhaps adjust the $250 million total in either direction, and present a final list of projects to take to voters next spring.

“That number can change based on the people they appoint for the committees,” said Vero Soto, director of the Neighborhood and Housing Services Department.

Housing advocates have already begun to lambaste the process, saying Mayor Ron Nirenberg is removing vocal critics from the Housing Commission and the San Antonio Housing Authority board of commissioners at a time when San Antonio is about to have its most robust public discussion about housing affordability in a very long time—perhaps ever. Whereas the convening of the Mayor’s Housing Policy Task Force four years ago was a public process, it was voluntary; next May, the matter of housing affordability and how much the city should invest in it—and how, specifically—will be taken to all of San Antonio for a vote.

It’s unclear at this point how many millions of dollars city officials will recommend for the other, non-housing bond categories such as streets, drainage, parks, libraries, and public safety facilities.

Here's how the last City of San Antonio voter-approved bond package compares to the one upcoming in May, from what we know so far.
…

Why does it matter?

The city estimates there are 96,000 “cost burdened” households in San Antonio, based on an assessment conducted by Economic & Planning Systems (EPS), a national consultant. Bullet points from the assessment were presented to Housing Commission on Aug. 25. The figure, Soto said, shouldn’t imply that 96,000 housing units need to be built. Rather, the total need can be addressed via home restoration, housing vouchers, and other forms of amelioration, in addition to the construction new low-income housing.

Another bullet point: 47% of all renters spend more than 30% of their income on rent, which is considered by the federal government as being cost burdened.

Economic & Planning Systems also concluded that “over the past decade there has been a need for approximately 25% more affordable housing due to (3%) loss of affordable rental inventory while simultaneously the demand has increased (22%).”

When it comes to homeownership, there’s a need for about 25% more affordable inventory “to keep up with loss of homeownership opportunities or new demand.”

Soto said Economic & Planning Systems used the latest data from the Census Bureau’s American Community Survey—considering factors such as lower-income households, the number of seniors, those with disabilities—to make its calculations.

“If a family is cost burdened, and they had a housing voucher, that voucher would address the need for that family,” Soto said. “It doesn’t mean necessarily building a new unit . . . make sure more property owners accept housing vouchers, so the unit they need to rent is available, a different type of intervention.”

Dovetailing with the bond recommendations will be the Strategic Housing Implementation Plan, or SHIP, which is the follow-up document to the housing framework, the 2018 plan intended to address San Antonio’s housing shortage. A copy of the SHIP document is expected to be made public in mid-September, and be approved by the City Council the same month or in October. A draft of the plan has yet to be released; as of last week, even council members had not seen a copy of it. It does call for the creation of 48,000 below-market units in the next 10 years, but specific targets of household incomes remain internal.

“That’s part of our recalibrated goals,” Soto said, “all those numbers are still internal numbers.”

The $250 million bond is expected to play the largest role in the SHIP document’s execution.

While city officials have not released specific projects, they have released the types of projects, or what they call program categories.

For the creation of new apartments, for example, bond money can be used for gap funding, which would help developers cover the cost of constructing units affordable to lower-income families. Here’s the complete list: 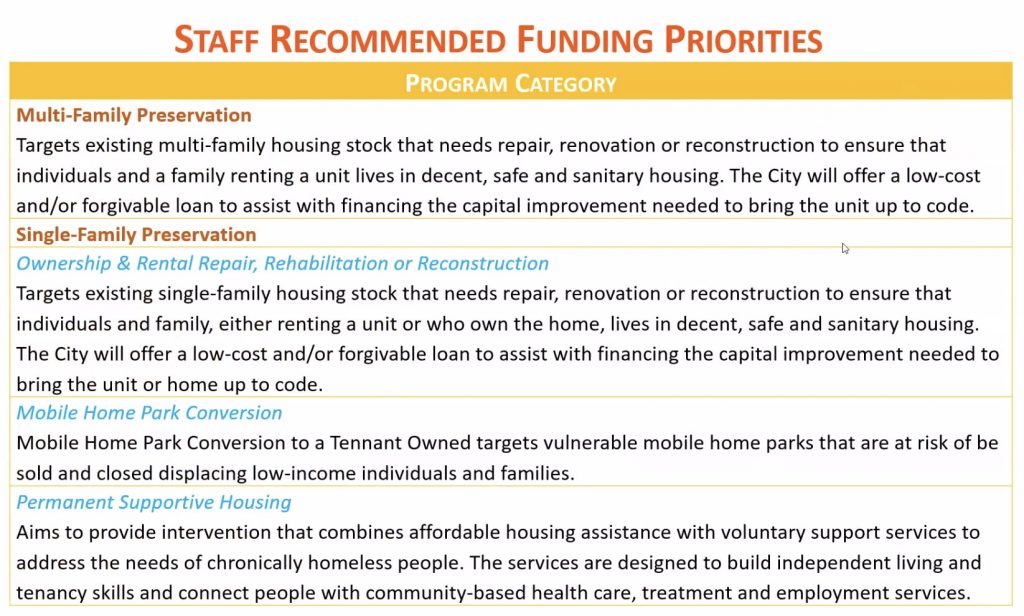 There has always been criticism surrounding the legitimacy of the bond process—whether big-ticket bond items are truly the product of a community process or pet projects of city officials or others in positions of power.

Nirenberg declined to be interviewed for this article, but told the Heron in a previous article that Gonzales “has a strong track record of tireless advocacy for the equitable distribution of resources and has long championed innovative housing policies.”

Sanchez worries that the spending of bond dollars will continue the way the city often incentivizes the really low-income housing, by setting aside a small percentage of units priced for people making between 0-60% AMI—instead of backing developments composed of primarily those lower-rent units.

She and other advocates want the bulk of the $250 million to fund the creation and preservation of units that serve the most vulnerable households—so in that 0-60% AMI range.

In recent weeks, advocates have staged two protests in front of City Hall, saying they are being pushed out of key roles during this pivotal time for housing in San Antonio. Lately, they criticized Nirenberg for removing Ruth Rodriguez, herself a housing advocate and SAHA resident, from the housing authority board. Nirenberg has yet to announce her replacement as one of two tenant positions on the SAHA board.

In an interview with the Heron, Sanchez said that as advocates get pushed out, their voices are being minimized to the bare minimum of the public process, typically a few minutes during citizens to be heard portions of public meetings.

“Right, and then it’s going to go before the city and we’re just going to be able to give our 2-3 minute commentary,” Sanchez said, rather than have a seat at the table of key bodies such as the Housing Commission and SAHA board.

However, appointing community members to the bond committees will be District 5 Councilwoman Teri Castillo, a housing advocate who fought alongside Sanchez to keep the Alazan Courts as public housing—a battle they won when former SAHA chief David Nisivoccia left the job and was eventually replaced by Ed Hinojosa Jr., a leader whose ideology is more in tune with the advocates. Another fresh face on the council, District 2 Councilman Jalen McKee-Rodriguez, has also been vocal about supporting housing that offers lower rents for families.

For Soto, it will be her first time going through the bond process, and said she would be surprised if the final list of housing bond projects mirrors the one city executives produce.

“I expect a lot of questions to be asked (by committee members), whatever the staff recommendations,” Soto said. “I think it’s going to be a very lively exchange. I don’t expect it to be a rubber stamp at all.”

“I would expect (the committee members) to ask a lot of good thoughtful and hard questions, and truly bring their knowledge of the city. The (City Council) B session (on Sept. 29) really helps set the tone. I’m sure they’re thinking already of who they want to appoint to the different committees.”

On Aug. 25, city officials presented the Housing Commission with a set of guiding principles based on a letter Nirenberg sent to the commission in March. In short, the mayor said bond projects should connect people, improve health outcomes and be part of developing resilient systems—all with the goal of correcting San Antonio’s inequities, which are grounded in this city’s housing history.

Of the $20 million from the voter-approved bond, $18.8 million was spent indirectly on 592 below-market units across 12 acres.