The proposed demolition of the 108-year-old Hughes home in Tobin Hill, owned by the Archdiocese of San Antonio, is on hold after community outcry led San Antonio College (SAC) to declare it’s not interested in buying the home.

On Friday, Dr. Robert Vela, the college’s president, sent a letter to the Tobin Hill Community Association stating that the college was not interested in buying the home, “given the projected costs of improvement and maintenance.”

The home, 312 W. Courtland Place, sits on the edge of SAC’s campus, and until a few years ago housed the campus’ Catholic Student Center.

“SAC further concluded that it would not wish to act as a redeveloper of the property in view of the sentiment of some community members against any demolition,” Vela said. 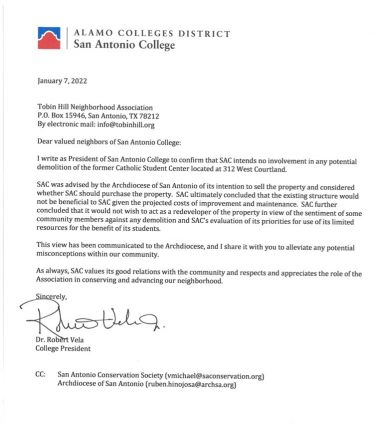 Yet the home—where the famous dancer Russell Hughes, known by the stage name “La Meri,” grew up—remains at risk of demolition.

The archdiocese has not withdrawn the application for demolition that it submitted to the city in September, said Shanon Shea Miller, director of the city’s Office of Historic Preservation.

In response to that application, the Tobin Hill Community Association filed a request for the city to review the property’s historic significance. The archdiocese has asked the city not to put that request before its Historic and Design Review Commission this month as it explores alternatives for the home, Miller said. In effect, that puts the demolition process on hold.

The archdiocese is now having the property reappraised “and will actively seek a buyer for the location, with monies gained from any sale going toward funding enhanced Campus Ministry initiatives,” Archdiocese of San Antonio spokesman Jordan McMorrough said in an email. “Any party with an interest in buying the property is strongly encouraged to contact the archdiocese.”

After the Conservation Society of San Antonio and residents of Tobin Hill raised awareness of the threat to the building in a blog post and on social media late last year, several people expressed interest in buying it, said Vincent Michael, the society’s executive director. He is now trying to help the potential buyers get in touch with the archdiocese, he said.

“I wouldn’t say I feel secure. I feel better, though, now that the entity that owns all the land around it is not interested in demolition,” Michael said, referring to SAC.

Lynn Knapik, a realtor and member of the community association’s board, said she is in touch with an investor who is interested in buying the home and turning it into apartments or condominiums.

Last year, the archdiocese told District 1 City Councilman Mario Bravo and others that it had received an offer to buy the 0.2-acre property. The letter from Dr. Vela makes it clear that SAC was in communication with the archdiocese. But Ken Slavin, a spokesman for the college, said on Tuesday that it did not make an offer.

Bravo said in a phone interview that he had spoken with Mike Flores, chancellor of the Alamo Colleges District, about the threat to the home, but that he struggled to get in touch with the archdiocese apart from a virtual meeting in November that was not productive.

“There are some cases that are debatable when it comes to historic preservation, but this is a clear case of a structure that we should be preserving in our community,” Bravo said. “In some ways, maybe this is a good warning to any prospective buyers in the future, that they know there’s going to be some really unpopular feelings around anyone purchasing this property to be involved in knocking that structure down.”

The home was never declared a historic landmark and is outside the boundaries of the historic districts for Tobin Hill and Monte Vista. It is uniquely vulnerable to demolition because a state law passed in 2019, and updated this year, requires municipalities to get the consent of religious organizations such as the archdiocese before putting properties under historic protection.

The home was built in 1913 by manufacturer R.M. Hughes after he moved to San Antonio from Louisville, Ky., in the hope that the local climate would improve his health. It was designed by prominent Prairie-style architect Mason Maury.

The younger of Hughes’ two daughters, Russell Hughes, grew up to become a famous dancer after studying Spanish and Mexican dancing in the home, according to a report completed last fall by local historic firm AHP Digital. Known as “the undisputed queen of ethnic dance,” she toured Europe, Asia and Latin America in the 1920s and 1930s under the name “La Meri.”

“It was not long before 312 W. Courtland Pl. was a hotbed of soirees,” the report notes. “Music and dancing performances were mainstays in the Hughes House.”

She and her sister, Lilian, began leasing the home after the death of their mother, Lily, in 1927. They went on to sell it in 1942. The archdiocese purchased the home in 1965 and used it for decades as a Catholic Student Center before shutting it down in recent years.

Richard Webner is a freelance journalist covering Austin and San Antonio, and a former San Antonio Express-News business reporter. Follow him at @RWebner on Twitter